3 Remembering the Iconic Bedroom on Wheels, the '50s Dormobile Campervan

The benefits and delights of vanlife are not reserved exclusively for the owners of larger vehicles, be they vans, buses, and towables like trailers and tiny houses. At the intersection of bikepacking and vanlife is a tiny little gray area where some of the world’s cutest, smallest, and most ingenious RVs live.

The Lambretta Tuk Tuk Camper is one of them. As its name implies, it’s a camper based on a vintage Lambretta three-wheel scooter. While it might not be the most practical family vacation vehicle (*lol, it is obviously not), it stands out for being a most impressive display of talent. It is a beauty, put it simply.

Tuk tuk campers, bike trailers, and all kinds of builds that are then welded on small-engine scooters or attached to bicycles do exist, and they’re more popular than you might be tempted to believe. As a rule, they’re more curiosities than actual RVs, for all the obvious reasons: even if they do offer RV-like amenities like a sleeping berth, a kitchenette, or features for a decent Netflix-and-chill-kind of evening, they’re underpowered, unstable, and very cramped. Very, very cramped.

But they can be used as RVs – and some of them have actually been put to the test. We haven’t been able to confirm whether the Lambretta Camper was ever used for the purpose it was designed for, but we’ll update the story when and if we get more details.
This gorgeous (and very small) camper is the work of David Motley, a man whose wife describes him as a “mad” raging perfectionist. David and Hazel own a Cambridge-based business called Hide and Stitch, which specializes in custom leather furniture and finishes – so, yes, they are what you might call artisans. This explains the excellent workmanship in the finished project.

Speaking of the project, it took David six months and £12,000 (approximately $14,200 at the current exchange rate) of his own money to bring into reality. The actual work started in January 2014, when David acquired the two parts that would serve as the basis of the future camper: a 1960 Lambretta Li 175 Series 2 scooter and a 1969 Lambretta box.

Lambretta is a scooter made in Italy by Innocenti, later outsourced to India, and recently revived. The Li 175 Series 2 was introduced in 1960 under the Lambro name and was offered with a box on top or a flatbed. David used the latter. He also found an original box from a later model that was once used by milkmen and is one of the two of its kind known to exist today. The work he had to do on both would have probably discouraged a less “mad” man: they were covered in rust and had basically to be stripped down to the bone in order for the actual build to start.

The cab of the scooter was in working condition, though, so at least there was that. David widened the box and cut the floor, and welded it onto the body of the scooter. He also tore down the wall dividing the two, welding them together to create more interior space and, this way, allow a fully-grown adult the possibility to lie down.

Inside, he created a cozy and surprisingly elegant lounge-like space, with a bed that fit himself and his two kids (snugly), storage cupboards, cup holders, curtains, and leather side panels. The fact that the Lambro had a two-person bench at the front helped because it allowed him to use it as a bed extension in camp mode.

At the rear, underneath the bed, David inserted a kitchen drawer. Press a button, and out came the drawer; inside it, he placed a tiny sink and a one-burner gas stove, with “cupboards” holding custom glass recipients with washing liquid, sugar, coffee, and tea. Separately, of course. In his chat with TV personality George Clarke for the show Amazing Spaces, David joked about the sleepless nights he’d spend agonizing over the color of the container caps. Somehow, you can tell he’s only half-joking because of the attention to detail on the build borders on obsession.

Amazing Spaces was the only media appearance of the gorgeous Tuk Tuk Camper, and it never touched on details like the powertrain or David’s plans to actually use it. That said, the Lambro model featured a single-cylinder two-stroke air-cooled engine that delivered 7 HP and a maximum speed of 36 mph (58 kph) when fully loaded. Maximum payload was 882 pounds (400 kg) for the flatbed model.

On the website that launched shortly after the start of the project, David jokingly described the Tuk Tuk Camper as “our tiny luxurious little motorhome” that would also be “unique” and “our family could all use (well nearly all of us!).” No word if any member of the family ever got to enjoy it like this, but at the very least, they got a very beautiful, very tiny thingy to admire. 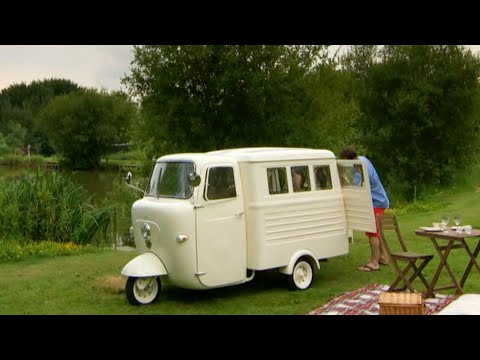 After their @GCAmazingSpaces appearance the boys are still riding high on their celebrity status ... bless. pic.twitter.com/Ps4hLWsKnP