1 A Guide to Motorcycle Tires: Part 1

2 We'll All Drop It One Day

4 Motorcycle Helmets, a Matter of Choice

A Guide to Motorcycle Tires: Part 2

Florin Tibu
Hi there, and welcome to the second part of our motorcycle tire guide. The first episode of this guide went through subjects such as tire age, and how to think twice before you spend your dime on rubber which just might not be the best choice for your bike or riding style.
It's not just the money

While the money you spend on tires might be a serious concern, the safety hazards which come with fitting improper tires on your bike are not to be taken lightly. Equipping your ride with completely different tires than those specified by the bike manufacturer will affect steering and comfort, while choosing the wrong tires for a specific situation will decrease grip. And of course, nobody wants to get half the expected mileage from their tires!

Assuming you're not thinking to stray from what your bike's producer wants on the motorcycle, still there's the mileage and grip question. The sooner you realize that these two aspects compensate each other, the better off you'll be.

In simple words, higher mileage tires offer a bit less traction, while rubber which sticks better to the ground will wear out sooner. There is no way you can get (as of today) a tire with seemingly “eternal” mileage and the traction of a racing one; and if you're asking yourself which way to go, it's you the one holding the final answer.

Before trying to load the “best tires” on your bike, you should know where you're going, in which manner and for how long. If you're set for a track day with your friends and are keen to show them who's the boss, you could think of forking our some dollars on supersport tires, but don't expect them to carry you in the same conditions on the streets of your town for the rest of the season.

On the other hand, if you're going to Alaska and have some 15,000 miles (~24,000 km) in front of you, choosing a harder tire with long mileage (and buying two sets) is the wiser choice. And even more, if you're the owner of a large touring bike in the vein of the Goldwing, Electra Glide, K1600GT Beemer and so on, you should go for tires designed to withstand the bigger weight of the bike.

When it comes to load capacity, some say that installing a higher load rating tire on the bike will give more mileage. While in some cases these tires could get you further, this is not a rule of thumb; different treads wear out differently and you might just get the same mileage from a “heavier” tire just like from a standard one. 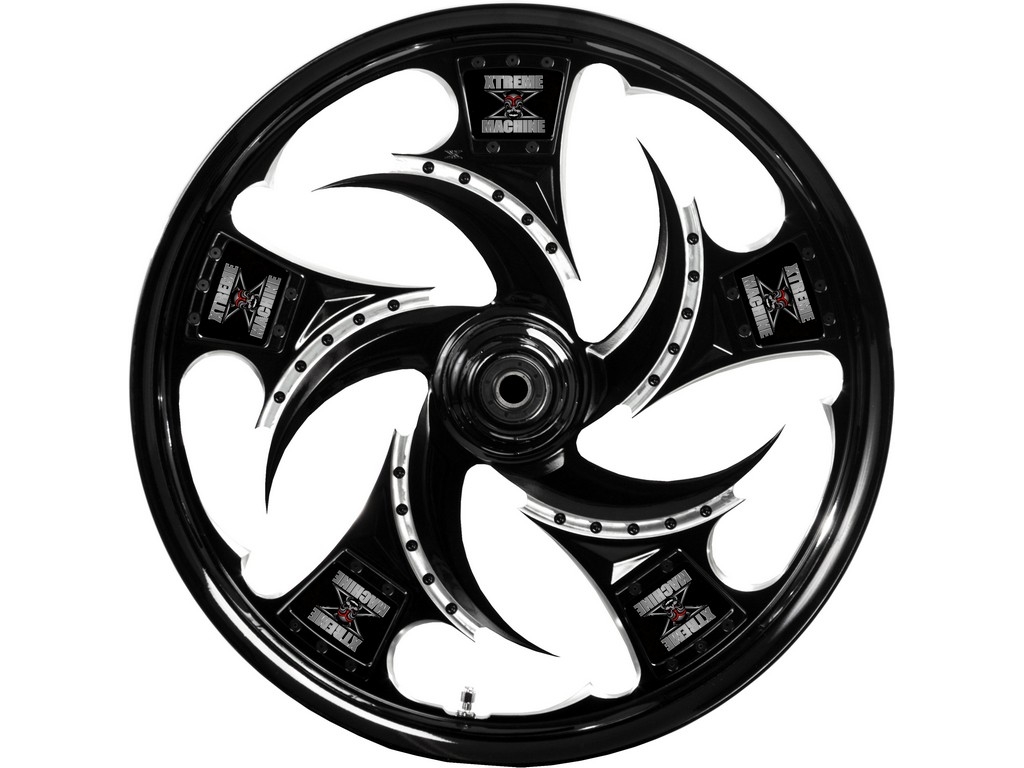 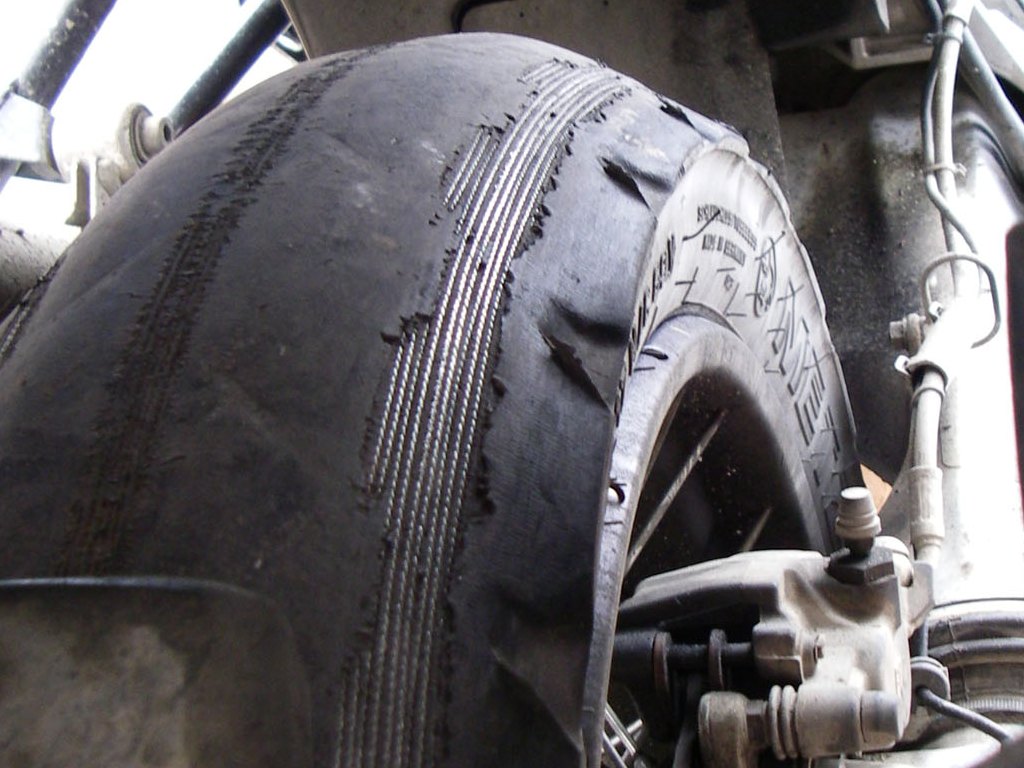 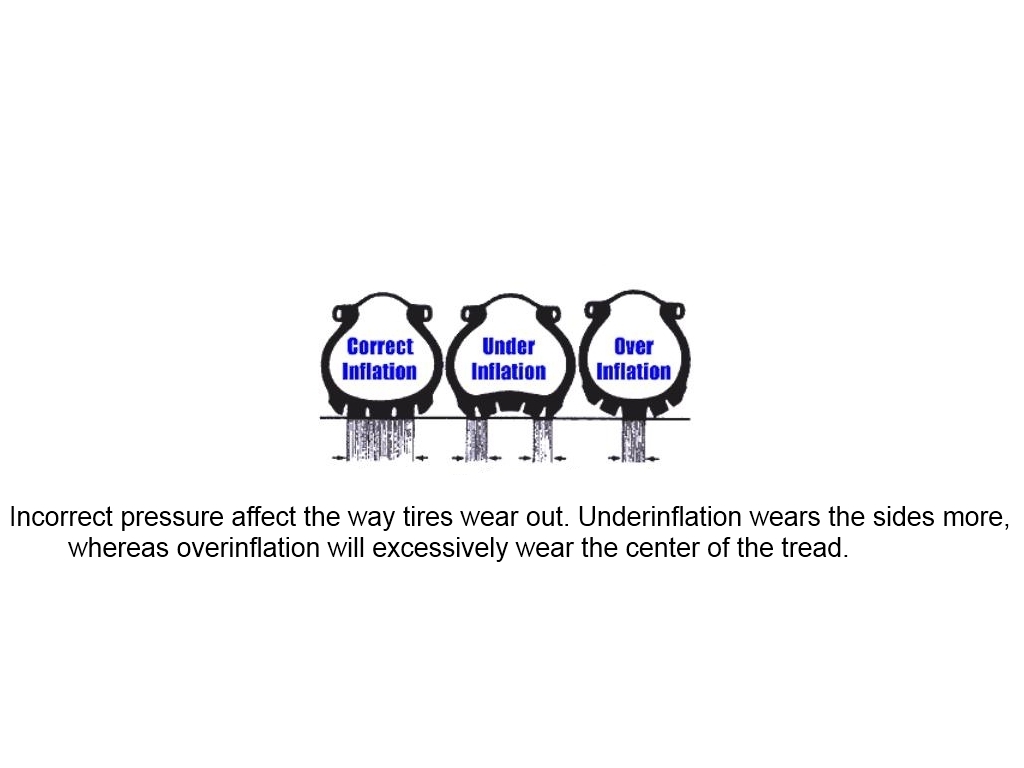 Mileage is not a one-way street and it varies dramatically according to the type of tires, surface you're riding the bike on, a softer or more aggressive driving style and so on. Traction can also be affected by how cold your tires are, knowing that hot rubber is softer than cold one and will adhere to the road better. If you're riding in wet areas, choosing a set of tires with special tread pattern will increase grip and add to the safety of the trip.

First of all, we should shed a bit of light on the differences between radial and bias-ply construction. A radial tire is made from rubber fibers (reinforced with nylon or steel mesh) which are perpendicular to the rotation direction, parallel with the front axle, in a pattern that winds around the section of the tie, if you wish.

Bias-ply tires sport the same fibers, but they are built in an overlapping pattern in various angles. Due to the very structure of the fiber layers, the bias tires have to consist of more parts and this also increases the overall weight.

There are a lot of bikes that come with bias-ply tires but most of them can also be fitted with radial ones. When stronger tires are needed, it's usually the bias ones, whereas radial tires are preferred for their increased handling; that's why you'll most likely meet bias tires on the large touring bikes. If you're not sure which way to go with your new tires, you can either buy the same type of tires like the worn out ones or ask a specialist in the shop.

There is little you can do wrong when it comes to this choice – but remember that radial and bias tires are not to be mixed on the same bike. Just make sure you have both tires with B (bias) or R (radial) lettering on them before installing.


Size, speed, tubes, rims and all

Once more a quick consideration on tire size: you won't be able to install a 17” tire on a 19” rim, so you'd better know the size of your rims before buying or ordering online. With width, there are a lot of guys who install wider thread tires on their bikes, especially for the rear position. This move could make a bike look meaner, but it comes with two small problems.

First of all, it's common sense that the wider the tire, the larger the contact patch, but... fuel consumption will increase with the added weight of a larger tire. Then, showing up for a technical inspection with tires wider than what you've got in the bike’s papers might just be the ticket to sending you home to replace them with the specific tires recommended by the manufacturer.

Just before you get new tires, take a minute to inspect the old ones and bike papers to make sure you get the right dimensions. And if you don't understand a thing from the 130/80-17S marking on the side wall, here's an explanation.

The final letter refers to the speed rating, S corresponding to a maximum speed of 112 mph (180kph). This means that the producer certifies that the tire is capable of running safely at said speed; for example, prolonged riding at 160 mph (roughly 260 kph) while equipped with S-rated rubber (112 mph/ 180 kph) is a very risky, inadvisable thing.

Other lettering group might display R or B and indicates the radial or bias ply design, further helping you choose the most suitable tire for your bike. Whenever in doubt, it's most advisable to follow the manufacturer specs, just to stay out of trouble.

It's recommended to change the tubes each time you load new tires on your bike, even if they're keeping pressure quite well. Rubber as they are, the tubes are prone to aging so changing them with new ones can't hurt if you're not on a very tight budget. 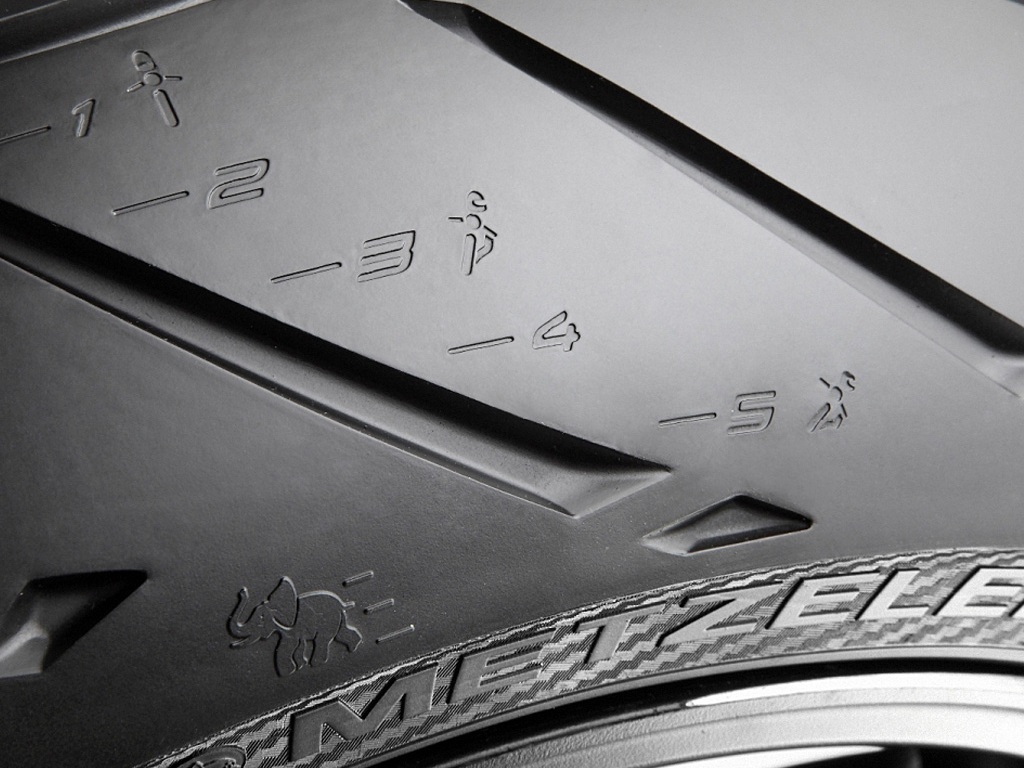 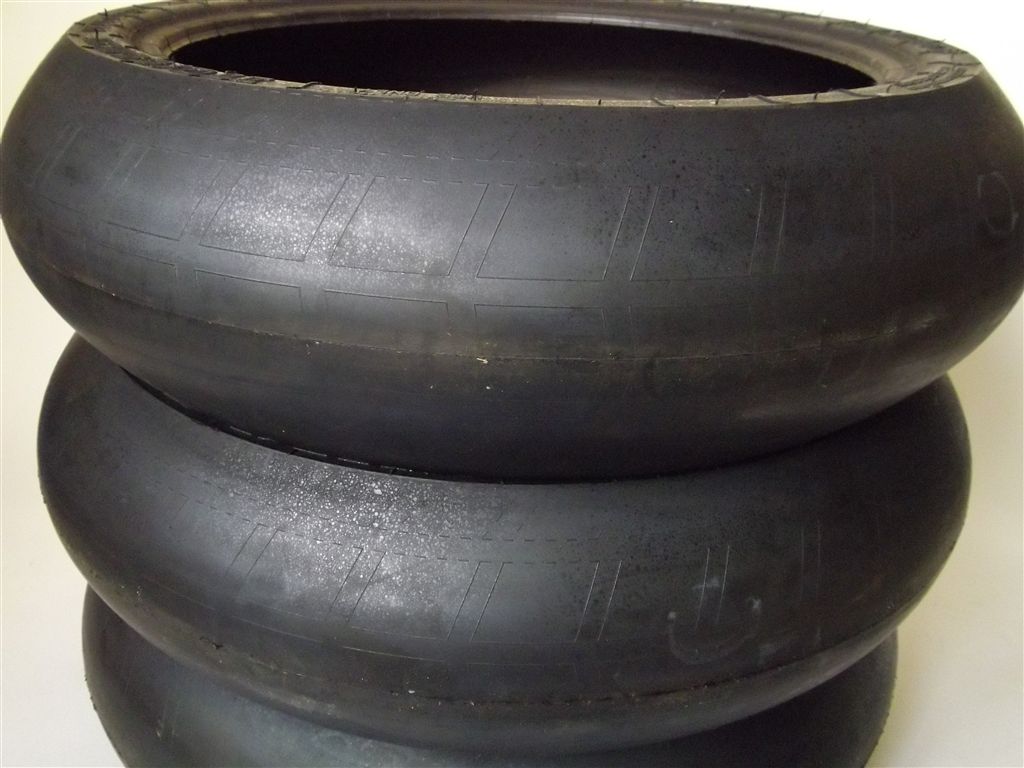 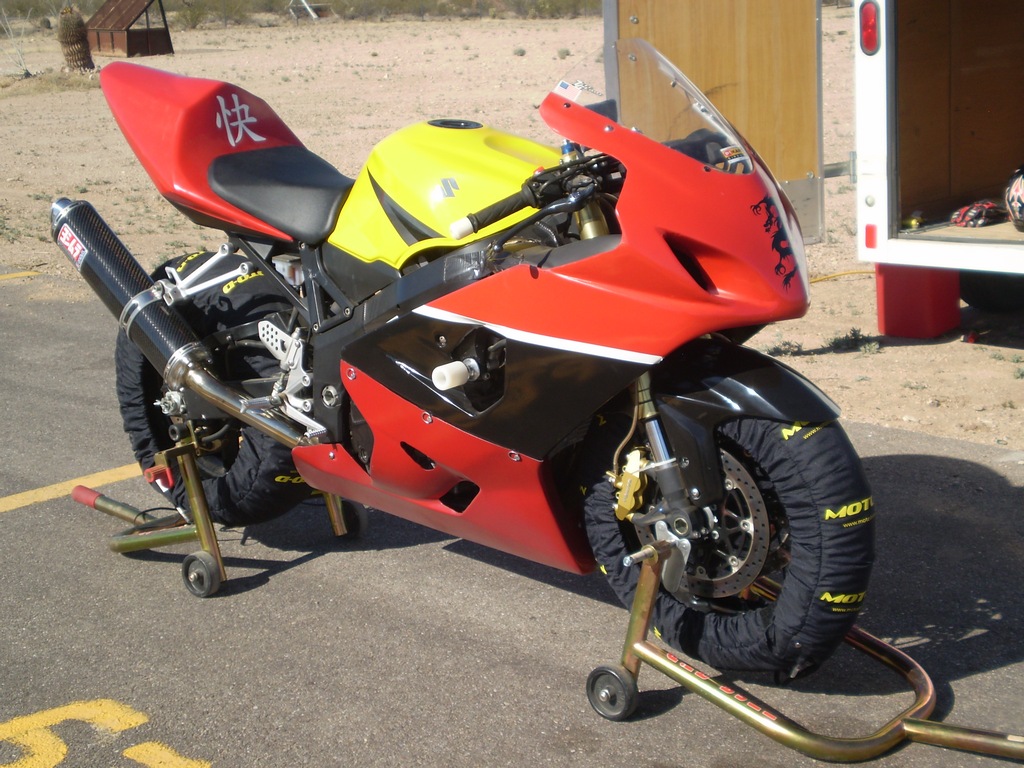 If you're not sure whether your bike uses tubeless wheels or not, you should be looking for TL or TT marked on the sidewall; TL stands for tubeless, while TT stands for tube type. Even so, be advised that most tubeless tires can be loaded with tubes. On the other hand, installing a tubeless tire on a tube type rim can end in catastrophic results.

You should always have the rims themselves checked prior to installing new tires, or inspect them yourself. Look for cracks and fissures, loose or broken spokes or for bent rims. Having things mended after you have loaded new tires will waste both your time and money, so look out for everything.


A word on heat

As we said before, hot tires provide better grip than cold ones. With heat, the rubber gets softer and more elastic, offering better road contact. The enhanced grip can be felt extremely well while riding on asphalt (street or track) – you'll be able to lean lower and less wheel slip will be experienced, especially for the rear.

Cold rubber is harder and grips less – you should always be more careful when riding in cold weather than you'd normally be during a hot summer midday ride. Cold asphalt will also slow down the heating process of your tires and you'll have to ride significantly more until your bike reaches the optimal temperature and traction.

When on a track day, you can use electric tire-warmers to give you the best riding temperature right from the beginning; just remember that tires tend to cool down quite rapidly when parked and a 10-minute break might be more than enough to put them out of the perfect-temperature zone.

As with the heating and cooling cycles, they also work on the rubber itself and end up affecting traction in a negative way. Harder tires withstand repeated heating-cooling cycles better than others, while supersport tires are the ones with the smallest tolerance for such treatment.

High-end racing tires are designed with the ultimate performance in mind and are usually built for a single heat cycle. They are also wearing out way faster than any other type of tires. If you're considering shoeing your ride with such tires, don't expect them to last too long. Looking for good grip and  longer mileage? You should be looking for some nice sport/ street tires, which can take some “sporty abuse” and still be almost as good as new for a long time.

Catch us with up in the near future for the last part of the motorcycle tire guide. And in case you've missed the first one, you can read it here.