$6.46 could buy many things 55 years ago, including happiness. Before you lift the stone, please wait a moment and take the time to recreate a fantasy image of a full tank of gasoline, a V8 with four letters attached to it, and Mopar luxury.

Maybe the "Mopar" and "luxury" word association is not the most common image a gearhead might visualize when thinking about the Golden Age. There are white-jacket exceptions - those six bucks and change were enough to fill a 19-gallon tank to the brim with tire-smoking liquid.

"That's not telling much," I hear you say, so let's play Sherlock Holmes for a moment. Many cars had 19-gallon (72-liter) fuel tanks during Lyndon B. Johnson's last year in the Oval Office. A considerable portion of those vehicles was from the Mother Mopar brood, and a lot had the V8 powerplant.

Large numbers of automobiles from the Chrysler family proudly called themselves muscle cars – and they earned that name fair and square.

However, a particular brand leaned over one very narrow market segment. The blue-blooded, cool-headed, well-mannered drivers that didn't shy away from a good dragstrip bare-knuckle mechanical fistfight. Gentlemen in their own right, these customers secretly yearned for a tuxedo night out with rubber smoke on the side.

But the crude, tarmac-shredding choices were below the standards of pretentious buyers who took (a great deal of) care of their image. Sure, there were the likes of 'Cuda, Challenger, and Roadrunner, to name a few. Fast and atrocious, these raging bare metal contraptions served their purpose.

Which wasn't creature comfort, to be honest, but pure adrenaline. Quick off the line, first across the other line, and that was pretty much it. Well, Plymouth decided it was about time to offer a different choice. Luxury and comfort first, with as much loud pedal testosterone as any other drag strip king.

Enter the GTX – the gentlemen's muscle car. It didn't last long, just from '67 to '71, but it didn't go unnoticed. 1968 was the initial year for the second (and longest-running) generation. The GTX had a rather unconventional model of segregation. 1967 was the single year of the first generation, and 1971 saw the dawn and demise of the last GTX iteration.

A little over 44,000 GTXs were built during its short-lived production, and customers had to settle for just two engine options. Not particularly appealing, lest we take a closer look: the high-end Plymouth muscle car offered the 440 CID (7.2-liter) Super Commando V8 as standard.

So, what was the alternative if the largest big block was the starting point? Well, there's only one correct answer: a smaller-displacement V8 with oddly-shaped heads, solid-lifter all-might, and a bullet-proof resonance: the 426 HEMI.

Sharply dressed and discreet while cruising through traffic, the GTX HEMI shed its delicate civilian garment when it lined up against other smug-performing muscle. With a 0 to 60 time of 6.3 seconds and quarter mile times of 14 seconds, the gentlemen's Plymouth was a handful.

"Car Life has never tested a standard passenger car with the accelerative performance of the Hemi Plymouth GTX" brilliantly catches the essence of what the gym-addict ivy-league Plymouth was all about. The magazine called the 1968 model "the fastest quarter-mile full-size Supercar you can buy off a showroom floor."

Something else unique about the '68 GTX was its one-year-only color option of Burgundy Metallic. Few survived to this day, but one of them – with a long and adventurous ownership history, is presented to us by classic car YouTubing enthusiast Lou Costabile.

This 1968 GTX shakes under the HEMI power – watch the video and see that this is not a metaphor – and sports a brilliantly restored body, interior, engine, and transmission. A minor controversy emerges – while the current owner claims that the V8 HEMI is a rebuild, we researched the car's past.

The dealership that performed the nut and bolt restoration argues that this Plymouth is a numbers-matching survivor (play the second video for details) The gallery shows this car after they finished the renovation project. One thing is certain: the automobile is a conversation starter - and the current owner describes this in detail.

Whichever the case may be, the GTX looks – and drives – as majestically as it did five and a half decades ago. The 425 hp (430 PS) and 490 lb-ft (670 Nm) pull like on day one, while the three-speed auto swiftly deals with those numbers. The rear 3.23 SureGrip differential could still make the red-line tires shriek in pain if the driver slammed it.

Because this particular car was a special VIP order, it came adorned with many luxury options. Apart from the HEMI – which alone was a $604 extra – the car has power brakes (with front discs), power windows (with rear defogger), a rear-seat speaker, or a folding center armrest for the front bench/bucket seats.

Tinted glass, hood turn indicators, a tach, an AM radio, driver's side remote mirror, front headrests, and woodgrain panels on the doors and dash complete the list to make this car look like it came out of the box. An intriguing mix of academic and frontiersman, the GTX was a shooting star on the gearhead's night sky, but one upon which many wished secret, piston-crowned dreams into reality. 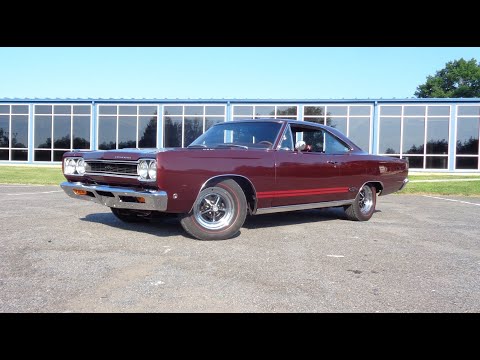 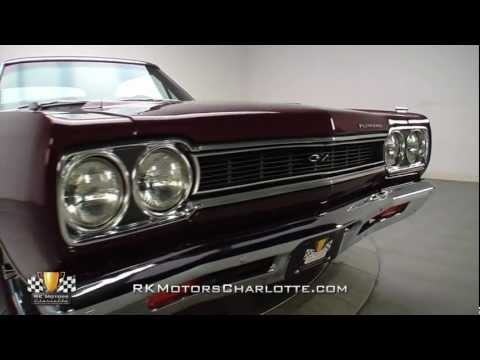