3 World's First Automobile Was Built by Benz in 1885. Here's a LEGO Version of It

999-Piece LEGO Bike Is Fully Functional, Has a Working Drivetrain and Everything

It is hard to keep track of all the projects submitted on the LEGO Ideas website. But every once in a while, a certain build gets your attention and sticks with you. As is the case with this fully functional miniature bicycle made of LEGO.
6 photos

The creator of the bike is user “SleepyCow,” but we reckon he didn’t have much time to sleep, with that complex project on his hands. The LEGO builder himself admitted the bicycle design was very challenging to pull off. One of the most difficult steps was to make the frame sturdy enough to hold the rest of the bike.

Even though it is just a miniature LEGO bike, the red machine is fully functional. Its creator used 999 pieces to build the vehicle that comes with pretty much anything you need for a two-wheeler ride.

He also paid attention to details and accessories such as a drink bottle rack, a bike GPS, a rear bike rack, and rear deflector, and even a bike stand. The LEGO builder even considered the security aspect and strapped a U lock on it.

SleepyCow explains his model has a good balance between technic and system bricks, and he wants to share his LEGO model with the entire LEGO community. He also thinks his working bike appeals to a vast audience, from children to adults.

The red, functional LEGO bike can become a real set if the creator manages to raise 10,000 supporters, and SleepyCow has already got over 1,750. He still has 593 days to reach the required number. If his bike model gets turned into a commercially available LEGO set, he’ll also receive 1 percent of the royalties from LEGO. 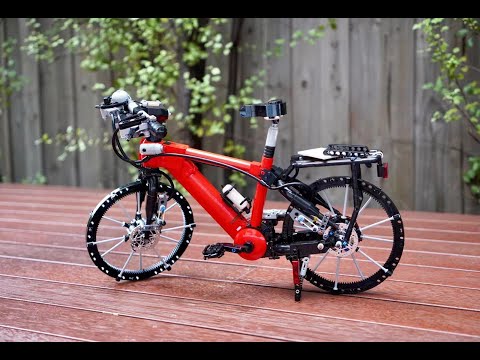