2 Kia Stinger GT Is Back for More Drag Action With C6 'Vette, Dodges, and BMW 235i

Whenever you see a stock-looking vehicle hitting the drag strip, there’s a chance one of them will catch the competition by surprise. But that usually happens because only the appearance has remained the same as the day that ride left the factory gates. Then again, when you proudly announce you’ve modified the vehicle “because stock is boring,” one will naturally have some pretty high expectations in terms of both performance and design, right?
19 photos

People usually take at face value what they see in front of them. If you have a muscle car at the drag strip, one will pretty much assume it will have the performance to back a bag full of claims at quarter-mile glory.

But let’s be honest, unless you drive something along the lines of a Demon – or, more recently, a McLaren 765LT – you're going to need to resort to all sorts of aftermarket tricks to make sure the expectations are fulfilled. And we have a lot of examples for that.

Some go that way while others proclaim from the get-go that modifications are the only way forward. Let’s take this Chevy Silverado, for example. In stock form, it wouldn’t be among the usual suspects at the drag strip, but just by taking a look at the thing will make it clear this is no ordinary truck. It’s not the lowered stance, the drag radials at the back, or even the “because stock is boring” decals plastered all over it.

Instead, it’s the additional front and side ventilation that gives away the party trick. According to the little information provided by the Drag Racing and Car Stuff channel in the following video, we’re dealing with a Silverado that was thoroughly prepared with an LSX port under the hood and a massive 98 mm (3.85 in) turbo for Serious Autosport, a Florida-based mobile electronics store.

Unfortunately, we don’t see the monster truck campaigned against a foe. Instead, it demonstrates its might all by itself with a quick reaction time at launch and an 8.84-second result for the quarter-mile, wrapping the run with a 156.8 mph (252.3 kph) trap speed! Hopefully, we’ll see it soon getting some proper competition. 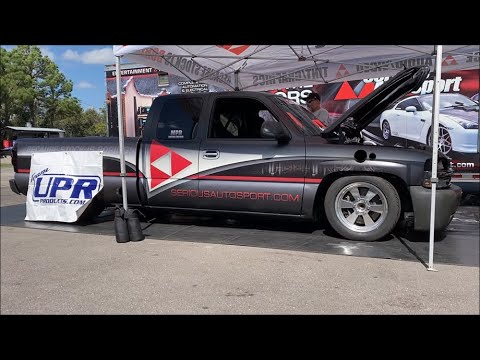