4 Audi TT-RS ECU Remap by APR
Up Next

Mihnea Radu
Audi is saying that without going electric, the TT is dead. We think that's a shame since the little coupe has pretty much reached the pinnacle of what a front-wheel-drive platform can do and deserves to be rewarded, not punished.
3 photos

We are, of course, referring to the TT RS. Even in stock form, its 2.5-liter pushing almost 400-hp is savagely quick, combined with the quattro launch system. But a quick tune can unlock even more power.

In America, amazing speed in an Audi usually implies APR is behind everything. This particular sleeper features full APR bold-ons like the inlet pipe, air intake, downpipe, and intercooler.

The plug-and-play system has a remap too, but the stock turbo is enough to push 22psi and produce around 600 horsepower at the crank or 530 whp on E85 fuel. The owner says his particular model hasn't been dyno-tested, but APR put the whole setup through its paces.

A few other mods that are worth mentioning here include new wheels wrapped in drag radials which look a little smaller than the factory setup but increase the acceleration tremendously. It also has the factory wing delete, which makes the car a little bit more slippery.

The TT RS doesn't weight much. Sure, the Porsche Cayman is lighter, but it doesn't hook up in the same savage way. We want to imagine that if the TT ever goes electric, its acceleration will also be amazing, based purely on our experience with Tesla.

But from what we've seen with the e-tron SUV, Audi isn't quite ready for electric performance cars yet, not the kind that will do a 9.76-second quarter-mile pass at 139 miles per hour. That's as quick as a stock McLaren 720S. Of course, you probably can't install an APR remap on the e-tron and add 50% more power. 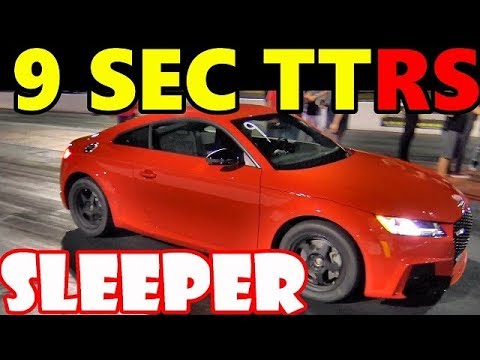