Gabriel Nica
With the current turbocharged engines, manufacturers use on their most advanced cars things are going better than ever for tuners out there. That’s because thanks to some carefully laid out ECU tuning, engines using forced induction can put down incredible amounts of power.
1 photo
That implies a small change in terms of hardware that gives you incredible gains. It’s also a lot cheaper to make your car go faster than before.

It’s a known fact that naturally aspirated engines can also be improved and tuned to make more power but it takes a lot more dedication, time and money to achieve similar outputs.

What we have here then are three cars that, coincidence or not, that represent both sides of the coin. On the one hand, we have the Lamborghini Huracan, one the very few cars out there today that is still powered by an atmospheric plant.

On the other hand, we have two arch rivals from Germany: a BMW M6 and Mercedes-Benz E63 AMG. Both of them have turbocharged engines that have, in turn, been upgraded even more.

Impressive but not solely the reason we’re here. That’s because usually, the stock Merc would be trashed by the Lambo. This is no stock AMG though and the V8 under the bonnet received a kit that took it up to the astonishing 950 HP figure. That’s a number that would make any other car in the world tremble.

Not the Lambo though that, as you’re about to see, held its ground pretty well. Then came the BMW.

Under the Bavarian’s bonnet hides a 4.4-liter twin-turbo V8 that, in pre-facelift M6 guise used to make 560 HP and 680 Nm (501 lb-ft) of torque. Thanks to the aforementioned tuning, though, it’s now good for 800 HP. Will that be enough to take down the Merc? 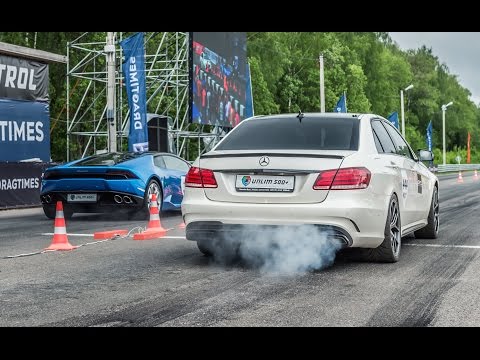