2 Porsche 911 Safari Closes In on Its Official Reveal, This Is It in Its Production Body

911 With Off-Road Skills: the Panamericana Is One of Porsche’s Coolest Concepts

Vlad Radu
Created as a birthday gift for Ferry Porsche’s 80th anniversary, the 1989 Panamericana was such a stunning blend between a sports car and an off-roader that the German carmaker flirted with the idea of a limited production run. Even though that never happened, it remains one of the most intriguing concepts of the era.
8 photos

During the 1980s, Porsche developed a new four-wheel-drive system that helped them win the Paris-Dakar Rally twice. On both occasions, the system was fitted on modified versions of the iconic 911. The first was a prototype codenamed 953, while the second was based on the road-legal 959, one of the most revered supercars of the decade.

In 1989, the second generation of the 911 entered production. To make the popular sports car a better daily driver regardless of the weather conditions, engineers utilized the lessons learned from the Dakar project and designed a new all-wheel-drive system that became available on models badged Carrera 4.

That year, Ferry Porsche - the son of the company’s founder and longtime CEO – was celebrating his 80th birthday, and to celebrate the occasion, a new Carrera 4 convertible received a complete makeover that would not only serve as an awesome gift, but also highlight Porsche’s ability to build a gorgeous roadster with off-road capabilities.

In charge of this endeavor were some of the brightest minds in Zuffenhausen. Under the watchful eye of the man responsible for the 911 Turbo, technical director Ulrich Bez, the Carrera 4’s chassis received an adjustable suspension that improved ground clearance and enabled the use of bigger tires.

Bez initially wanted to fit a turbocharger, but since his team was on a tight schedule, the stock 3.6-liter flat-six was used. Linked to a five-speed manual, it was rated at 247 hp and 230 lb-ft (312 Nm) of torque, which was more than enough considering that the body panels were set to be fabricated from lightweight materials like plastic and carbon fiber.

The task of designing the bodywork was handed to Harm Lagaay and Steve Murkett, Porsche’s best stylists at the time. They started with a clay model that was finished in record time, then quickly moved on to building the real thing.

The overall shape resembled the 911 and used some components from the production version such as the headlights or side mirror, but almost all the panels were completely redesigned. The most striking feature is the shape of the wheel arches which left the front and rear wheels exposed, much like what you would see on a dune buggy. This was done so that the car could clear obstacles with ease, and, along with the adjustable suspension, this cutaway design allowed the use of various tire sizes.

The sloped shape of the roof was inspired by the 911, but it featured a removable rear window and a waterproof fabric top that was held in place with a neon pink zipper.

Inside, it came with a dashboard and steering wheel borrowed from the new 964-generation of the 911. The standard seats were swapped with a pair of slim buckets, whereas the rear seat was completely removed. Everything was upholstered in a blueish-green leather that matched the exterior paint and some trims got the neon pink treatment.

The final touch was a set of three-piece, 17-inch alloy wheels that were designed by Speedline exclusively for this wild car. The tires were also custom-made by Goodyear and featured thread patterns that resembled the Porsche logo.

Named after the famous Carrera Panamericana, a border-to-border rally race held in Mexico, the concept was ready in just six months, and was presented to a visibly displeased Ferry Porsche on the day of his 80th anniversary.

The failed birthday gift made its first public appearance at the 1989 Frankfurt Motor Show and this time, it was met with enthusiasm. In the months that followed, it was taken to Japan for the Tokyo Show, where it received a warm welcome once again.

Encouraged by the public’s reaction, chief designer Harm Lagaay lobbied for a limited production run. He argued that the car would do well in terms of sales, particularly in the North American market. Management considered the idea, but ultimately decided not to pursue it since the company was going through financial struggles at the time.

A cool combination between a sports car and an off-roader, the Panamericana remains one of the most intriguing concept cars to don Porsche badges. Today, it can be admired at the manufacturer’s museum in Zuffenhausen. It’s displayed alongside the 1993 Boxster concept, another Harm Lagaay creation that was inspired by the 1989 off-roader.

You can learn more about this fabulous vehicle in the video below posted on YouTube by 9WERKS TV. 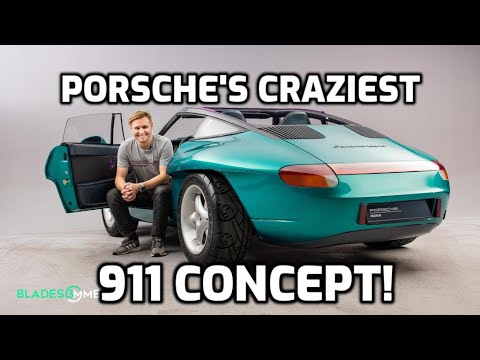