4 Dodge Demon Drags Trackhawk in Obliteration Run, Gets Vanquished by a Charger

Right now, all sustainable quarter-mile eyes are turned towards stuff like the Rimac Nevera or the Tesla Model S Plaid. But that doesn’t mean there isn’t a place for old-school power in this day and age. And events like the GT-R World Cup go a long way toward providing a bit of ICE relief – and the hope that such straight-line monsters will have a place in the world... at least during official motorsport encounters.
22 photos

Everybody knows very well the latest Porsche 911 Turbo S is not just a mind-numbing corner-carving machine, but also an absolute blast on the quarter-mile. And even its predecessor, the 991 generation, isn’t too shabby at all – especially when there’s (possible) aftermarket shenanigans at play. So, German sports car fans need to check out this blue example (number #67) going against some of the best quarter-mile monsters out there.

And, even though it’s an event labeled as the GT-R World Cup, it’s adamantly clear that not everything is about Nissan’s mighty supercar. Actually, a GT-R does make an appearance in this video provided by the good folks over at the Drag Racing and Car Stuff channel on YouTube, but it’s only late during the action. Before that, we have an appetizer, as well as a trio of cool encounters.

First up on the grid next to the blue 911 Turbo S is a silver... 911 (another Turbo S, perhaps). This skirmish isn’t exactly enticing, since the former wins by a huge margin. The second attempt at washing the initial shame is way better, and from the 1:15 mark, the two Porsches duke it out like pros... though we’re still dealing with a sensible gap (8.87s to 10.62s ETs).

The 911 gets a bit more competition from a McLaren 720S but it’s clear the British model’s time of ruling the quarter-mile battles has come to an end. A swift one, considering the 8.88s and 9.53s results for the Porsche and McLaren, respectively. Next up from the 3:10 mark comes a twin-turbo Lambo Huracan challenger, and this one puts up a way better fight than any of its rivals before. Still, not enough (8.84s vs. 9.94s).

On the other hand, it’s not called GT-R World Cup for nothing. So, a pink Nissan GT-R comes out to play at the 4:05 mark... and it quickly delivers the deciding blow to the 911’s ego. So, the Japanese monster snatches the “crown” with an 8.64s to 9.06s ET after the German rival had a rather slow start. 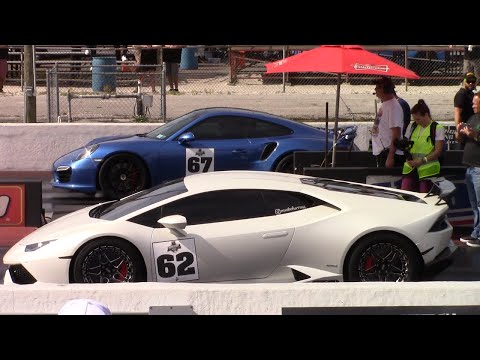