3 Porsche 918 Gets an Unofficial Facelift, Shelby GT350R Acts As the Donor Car

First Android Auto 8.0 Version Now Available for Download, And Everybody Is Disappointed

If you ever played Need for Speed: Porsche growing up, you'll remember how slow the 356 A was. Over 60 years ago, this kind of vehicle would usually run on a 1.6-liter 4-cylinder boxer engine with just 59 hp and 81 lb-ft (110 Nm) of torque. But technology has come a long way since, and the fastest Porsche known to man is now the King of the Nürburgring with a fast lap of five minutes and 19 seconds.

But today we aren't going to talk about the 919 Evo Hybrid, as few people in this world will ever get to drive that car. Instead, we're looking at two slightly more accessible vehicles: the 911 Turbo S and the 918 Spyder.

Well, using the word accessible for Porsche's hypercar might be a bit of an overstatement. But the German manufacturer did build a total of over 900 units, so it's not an impossible dream.

Today's drag race pitches supercar against hypercar, and we're about to see what paying roughly $1 million more on a car means for such a challenge.

Meanwhile, the 918 Spyder is a slightly more complex machine, with two electric motors adding extra oomph to the naturally-aspirated, 4.6-liter V8. Using electric power is something we'll be seeing more and more often in the future, as other supercar and sports car manufacturers will turn to this solution in an attempt to reduce carbon emissions.

By all means, you would expect the 918 Spyder to blow its opponent out of the water. Of course, we've talked about this many times before and you can't rate a car based solely on its quarter-mile (402 meters) performance.

But until we get our hands on these two around a racetrack, we'll have to settle for the most basic of tests. For the first run of the day, the 911 Turbo S is off to a great start.

With all its torque, the 918 Spyder just can't catch up even though it seems the gap was getting smaller. Porsche's supercar is formidable during the launch sequence once again, but we all know that this test can only go one way.

The hypercar comes flying past it on the second run and scores its first point of the day. The best two out of three rule requires one more attempt before a winner is decided.

That's nothing a $30,000 investment couldn't solve if you wanted to. For the half-mile (804 meters) rolling race, the hypercar seems to be vulnerable when using Hybrid mode as it loses the first run. But it makes up for it after switching to Sport and then Race-Mode by securing two consecutive victories.

The last test of the day is also quite impressive to watch, as you get to see the stopping power of both these vehicles. Spoiler alert: you could call it a photo finish! 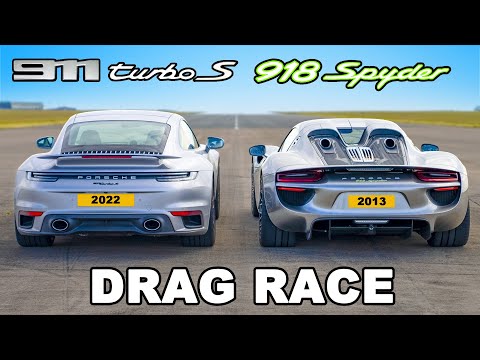