3 Insane Roush Mustangs Turn on Each Other in 1,500-HP Drag Race

Think of the most iconic Japanese sports cars of all time. Chances are that the first ones that come to mind are the Toyota Supra, the Nissan Skyline GT-R, the Mazda RX-7, and the Honda NSX. We often hear enthusiasts discuss the capabilities of these cars. They all have their strong points and weak points as well.
19 photos

I guess most people will agree to the fact that the Supra and the Skyline GT-R are the two all-time Japanese heavyweights. And that's exactly what's on the menu for today. It makes sense to say that a drag race is only as exciting as the cars involved in it are. And if the two contenders already have a decade-long rivalry behind them, everything gets taken up a notch.

As if a race between a Supra and a Skyline GT-R wasn't going to be interesting enough, both these cars are highly tuned. But even before they line up for the first run, there's one major difference to account for. The Supra comes with RWD, while the GT-R has AWD. We are going to see multiple runs, though, so we shouldn't jump to any conclusions just yet.

For the first run, we'll see how fast these cars can hit 60 mph (96 kph) from a standstill. Then, they will be performing quarter-mile (402 meters) runs by themselves. After that, we get to see the main event: a head-to-head battle down the quarter-mile, starting from a dig at first and then from a roll. Karl is the driver of the MK IV Supra. With about 900 horsepower on tap, you can imagine this thing has got a huge list of mods.

The 2JZ-GTE engine has been fully built, and it's running a massive Precision 6870 turbo with a Syvecs ECU, to name just a few of the upgrades. As I've noticed before, not everyone is aware of the fact that the Supra isn't the lightest of sports cars, as it weighs 3,637 lbs (1,650 kg). Affi is the man behind the wheel of the Skyline GT-R. That supposedly only has around 800 horsepower, but it does have the AWD advantage to work with.

The RB26 unit has been fully built and is now up to 2.8-liters. The twin-turbo system has been ditched in favor of a Greddy T78 turbo, and the car weighs in at 3,439 lbs (1,560 kg). All in all, this sounds like a pretty evenly-matched battle. The Supra is up first, and it records a 0 to 60 mph time of 4.36 seconds. By comparison, the GT-R looks savage going off the line, and it only needs 3.30 seconds to achieve the same performance.

Moving onto the individual quarter-mile challenge, the Supra starts looking less and less impressive going off the line. It needs 12.18 seconds to cross the finish line, while the GT-R is quite a bit faster at 11.28 seconds. It's starting to look like the Supra's only hope for today will be the rolling race. Affi gets overexcited for the first run and he jumps the start, so a rematch is in order.

Even so, there's not much that Karl can do to compensate for the GT-R's ballistic launch. So the Nissan wins the challenge even before it's all over. But it's now time to see the rolling start, the Supra's last hope. They're neck and neck, and it does look like the Nissan might lose this time. Looking at both drivers' faces, they're serious about winning. And we get to see a spectacular photo finish! But I won't spoil it for you, just go ahead and watch how it unfolds. 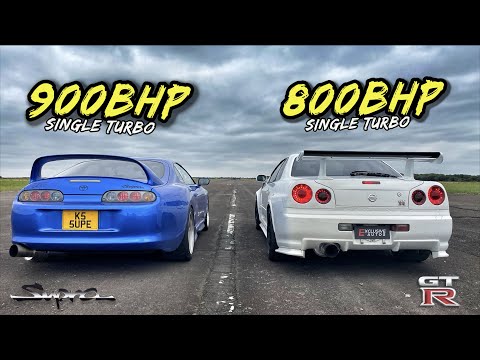