4 Inside Drake’s Rolls-Royce Cullinan Chrome Hearts, a Gothic Assault on the Eyes

Home > News > Tuning
Vlad Mitrache
The Ferrari F8 Tributo is a serious piece of machinery, and anyone who doubts that should go and check the clips Brooks Weisblat from Drag Times made with his car where it proves it can be more than a match to the mighty McLaren 720S in a quarter-mile drag race.
7 photos

In stock trim, the mid-engine supercar makes 700 hp (710 PS) and 568 lb-ft (770 Nm) of torque, which is another way of saying more than enough for a rear-wheel-drive car. The power comes from a 3.9-liter twin-turbo V8 engine, and Ferrari was kind enough to provide a little window at the back of the cabin that provides a perfect view of the masterpiece. It may not be as intrinsically Ferrari as the V12 in the 812 Superfast, but it should be enough to leave most people in awe.

It obviously wasn't enough for Mansory, which pushed those figures way higher. The F8XX now makes 868 hp (880 PS) and 708 pound-feet (960 Nm) of maximum torque, though some of that might be restricted for the lower gears to make sure the whole car isn't turned into anything other than a big tire shredder.

However, the one thing that will catch anyone's attention—and Shmee will be the first one to confirm that—is the F8's new color scheme. Ferraris are known to come in a handful of colors, and none of them is green. And even if it were, it wouldn't be anything like this green. It's called the "Catania Green," and since we've never been to Catania, we can't say whether the name does it justice or not, but what we can say is that it looks absolutely sick, especially with those gold wheels and stripes.

Mansory has a knack for going over the top with its designs, and one could argue it's done pretty much the same with this Ferrari F8 Tributo. At the same time, though, you can't deny cars like this are an eye magnet. Sure, they'll pierce it with their pointy surfaces and sharp edges the moment you set your eyes on them, but even though their appearance is so busy you'll struggle to find a square inch to rest your sight on, you'll find yourself coming back for more.

The Mansory F8XX may not be the definition of "beautiful," but you'll have to dig deep to find a better one for "exotic." The green paint goes a long way in that sense, and with the Ferrari badges removed, it will also give plenty of people a hard time identifying the brand. If you think about how famous the Italian company is around the world, that is pretty hilarious. 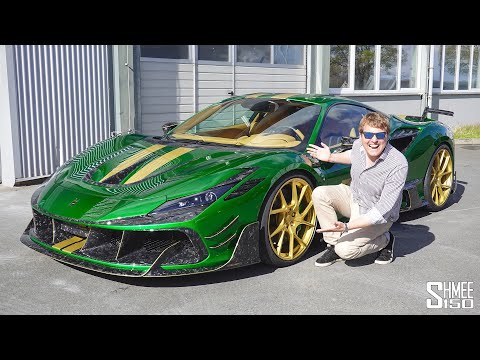