5 Billionaire Owner of $325M Amadea Spent Over $500K on Fuel Trying to Flee Sanctions
Car video reviews:
Up Next

This was a close call: an $8.5 million yacht from prestigious shipyard Benetti, built in 2004 and bought by the current owner in 2021, nearly sank off the Washington Coast in an incident last weekend. The US Coast Guard has released video, photos and details of the rescue operation.
6 photos

According to the US Coast Guard, the crew on Domani called in for assistance in the early hours of Saturday, May 7. The transom door would not close, so the beach club was being flooded. The ship was 45 miles (72.4 km) north of Grays Harbour in Washington and could no longer move as it had lost all power and propulsion when the crew activated the engine room’s fire suppression system after seeing smoke.

First to arrive on the scene were a Jayhawk helicopter crew from Air Station Astoria and motor lifeboat crews from the stations at Grays Harbor and Quillayute River. They found the yacht floundering and rolling in the swell, with water sloshing into the beach club. However, the size of Domani (45 meters / 147 feet) meant that motor lifeboats couldn’t tow it back to safety, so USCG Cutter Active was summoned.

USCG Cutter towed Domani to Neah Bay for ten hours, transferring it to a commercial towing vessel, which will carry it to Port Angeles for repairs and insurance checks. According to the official report, there were seven people on board the yacht when the malfunction occurred, but no one was injured; all seven were transported onboard the same Cutter Active.

Prior to its acquisition in 2021, Domani was among the most popular charter vessels in the Burgess fleet. Offering accommodation for 12 guests, it is finished luxuriously and elegantly and comes with stunning amenities like a sky lounge, a private terrace outside the master suite, a jacuzzi, and a generously-sized beach club. It was completed in 2004 and saw refits in 2014, 2017, and 2019. Its last asking price was $8.5 million – so you can imagine repairs after the recent flooding won’t be cheap.


(2/2) A 210-foot #USCG cutter is diverting to the area to tow the vessel. It is unknown why the transom door failed. Stay tuned for updates. pic.twitter.com/uyZqgq4UxT 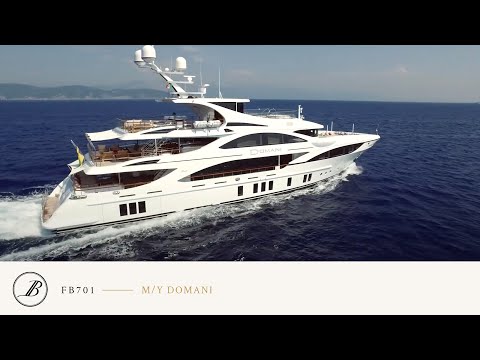