1 What to Do When You Find Cash Under the Windshield Wipers?

3 Attempted Carjacking Stops When the Victim Gets Inspired, There's Video of It

81-Year-Old Gets Carjacked While Feeding Homeless, Does Not Lose Hope in Humanity

An 81-year-old woman in Southern California got carjacked in a parking lot after she fed homeless people. Just after she handed food to three people who did not have a home, someone approached her, took her keys, proceeded to lock himself in her car, and took off with it.
8 photos

The entire incident was caught on video, which must have helped the Redland Police Department apprehend the suspect. In the video, you can see the victim, her car, multiple people who had received food from the 81-year-old, and the alleged carjacker.

While the video has no sound, you can see that a person approached the silver SUV, met the victim, and proceeded to enter her vehicle after getting the keys from the victim's hands.

From there, the suspect closed the door, and then another conflict erupted as the owner of the vehicle attempted to open it but failed to overpower the suspect.

Once the engine is on, and the vehicle is put in reverse, the suspect drove off, without caring that the 81-year-old woman was desperately holding on to the driver's door handle.

The victim fell on her side, while two of the people she had just provided food to ran to her assistance. A third person who was helped had attempted to stop the alleged carjacker, but did not succeed. Fortunately, the 81-year-old was not seriously injured after the violent event.

The 2015 Kia Sportage was found in a parking structure in downtown Los Angeles. When police officers found the vehicle that had been reported stolen, a man was behind its wheel, and the keys of the vehicle were in his possession.

The 24-year-old man was arrested under the charge of possession of a stolen vehicle, and was then transferred to a San Bernardino jail. The bail of $250,000 was set because of the charges of carjacking and elder abuse, which were also filed against the defendant.

Despite going through a dangerous event at 81 years old, the victim of the carjacking told CBS News that this event would not stop her from continuing to help those in need. 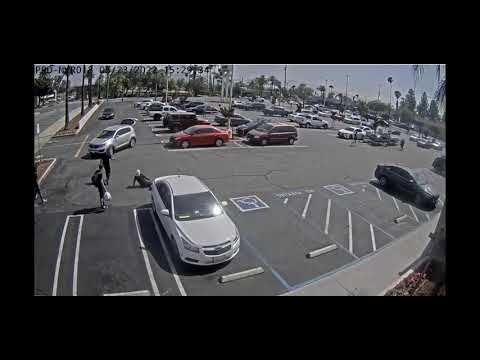