2 Twin-Turbo Chevy Malibu Takes Flight in Texas, Doesn't Nail a Save Upon Landing

3 8s SRT8 Jeep Humiliates Camaro, Then Tries to “Climb” the Tree During Burnout

80-Year-Old Races Tuned Dodge Hellcat Like There's No Tomorrow, Gaps Them All

Popular culture is filled with “Bad Grandpa” tropes, but Jackass’ alumni Johnny Knoxville has nothing on this very nice senior. After all, he likes to showcase his passion for life through racing instead of idiotic shenanigans (sorry, Mr. De Niro, but you’re in this pot as well with that “Dirty Grandpa”). And we certainly approve, especially seeing that he really likes to put on a good show for the crowd.
34 photos

Many think that getting old also means settling down and embracing seniority in the quietest of ways. But when you’re someone who’s “been doing this pretty much all life,” and by that, we mean racing, there’s no other way than continue with the passion.

According to the fitting description provided by the Race Your Ride channel on YouTube, Fred Schimek is a very nice 80-year-old who loves to spend time with the same gearhead buddies he’s had since high school. He sometimes hits the road with them for very nice outings at the Byron Dragway playground in Byron, Illinois.

And he doesn’t go there in a family car to watch the racers because he’s actually one of them—and he’s apparently been part of the very special quarter-mile breed for ages. While in the past, he’s run things like a 409ci four-speed 425-horsepower Studebaker or a Hemi Super Stocker, today’s video (embedded below) has the gentleman showcase his built 2016 Dodge Challenger Hellcat instead.

This feisty red ride (his other racer is a ‘63 Dodge Polara with a 540ci B1) reportedly develops over 700 ponies, so we really shouldn’t be surprised by the smoke show he’s putting on for fans before each of his quarter-mile runs.

As far as the latter are concerned, we’re treated to a trio of them. First comes a solo outing against 25-mph (40 kph) headwinds that gives us a taste of things to come with a 10.62 ET. By the way, decades of experience deliver perfection in this case, with both subsequent runs ending up with the same time! And do we need to point out he’s gapping both the Chevy truck (from 1:47) and the classic competitor (2:08) like a boss? 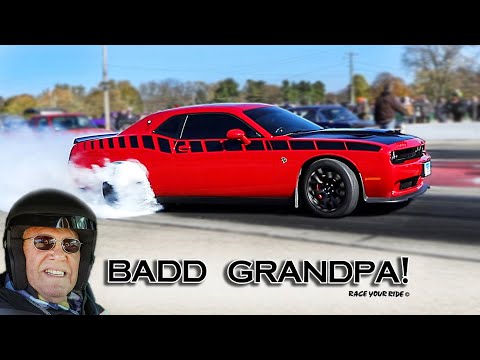