789-HP Mustang Will Give You the Heebie-Jeebies

There are plenty of ways to rank cars, starting from body size, type of engine used to horsepower levels, and so on so forth. But I sometimes like to rank the cars I've come in contact with based on scary they were. And it's not uncommon for a car that's more powerful to be less scary.
14 photos

I've driven both a road-going BMW M3 E92 as well as a drift-spec BMW 3 Series E46 that was fitted with a V8. While the M3 E92 felt quite comfortable and docile, the E46 was, by all means, savage, even though it had less horsepower. And I guess it wouldn't be wrong to assume that the older the car, the scarier it's going to be to drive. With fewer driving-aids in place and with older technology, the driving experience is going to be more soliciting.

It's safe to say that an SN95 Mustang isn't going to be as easy to drive as a brand new, sixth-generation one. And things are only going to be more complicated if we're talking about a Terminator Cobra. The supercharged 4.6-liter V8 was good enough for 390 horsepower and 390 lb-ft (529 Nm) of torque. With all that power sent to the rear wheels, you need a special set of skills to extract this vehicle's full potential.

But someone decided that a supercharger just wasn't going to cut it for this 2004 Terminator Cobra. And they went on to increase the engine displacement up to 5.0-liters while also bringing in a twin-turbo system. We're looking at a fully-built engine that is now capable of delivering 789 horsepower at the rear wheels while running on pump gas! A sturdy Lentech 4R70W four-speed transmission also made its way onto the car.

Nothing has been left to chance with this race-bred vehicle. Both the suspension and the brakes have been upgraded. And there's a whole bunch of gauges to pay attention to when driving. When it was stock, this car could run the quarter-mile (402 meters) in about 13 seconds, with a trap speed of 110 mph (177 kph). But with its current power levels, I wouldn't be surprised if it could dip into the 9-seconds territory.

As if the whole package wasn't exciting enough, there's one more important thing to consider here. In 2004, Ford built less than 6,000 Cobras. 3,768 of those were coupes, while 1,896 were convertibles. The coupes were available in eight different colors. Black was the most common one at 820 units, while Competition Orange was the rarest version at 281 units. The car that's being sold here was finished in Mystichrome. And that makes it one out of 515 units ever to be built.

If you don't mind having to stop at the gas station once every 100 miles (160 km) or so, you'll be happy to know that this car still has some comfort features on it. But every time you'll go out for a drive, you'll be reminded of its vicious character, as it even has a start sequence you need to go through every time. This Mustang is currently located in Charlotte, and the odometer shows a total of 85,046 miles (136,868 km). This has more power than a Shelby GT500, but it comes at a much lower price: $51,995! But do you have the nerve to drive this like it was meant to be driven? 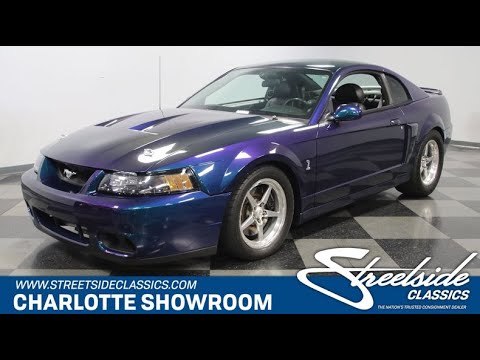