1 Porsche 911 GTS Sings the Song of Its People, Goes All Out on the Highway

2 2017 Lotus 3-Eleven Looks Like a Toy Next to Trucks on the Highway, It's Still Fast

4 2022 Range Rover P400 Guns for Top Speed on the Highway, Makes Itself Heard

I was never a big fan of SUVs, as my attention was always focused on sports cars. But after driving a few modern-day ones, including the Volvo XC90 T8, I've changed my mind. These road-going giants might not have a place on the racetrack, but they can be quite fast on the road. And you don't even have to spend a fortune on a Lamborghini Urus to own a fast SUV.
9 photos

Just look at the BMW X3 M. Granted, BMW calls it a Sports Activity Vehicle, but most people will still label it as an SUV anyway. The 2022 model has a starting MSRP of $70,100 before tax ($995 handling fee).

But the car featured in this video is a 2020 Competition version, which you can get for about $10,000 cheaper on the used car market. And why stop there? Why settle for the 503-hp and 443 lb-ft (600 Nm) of torque setup? Boosting the performance of the twin-turbo S58 engine seems like the natural thing to do when you're playing at this level.

And it needed 13.58 seconds to go from a standstill to 124 mph (200 kph). Lowering the car, going for wider tires, an upgraded exhaust, and turbos changed the way this car drives. And although the owner built it with drag racing in mind, there's nothing quite like a wide-open-throttle test out on the Autobahn.

You don't even have to see the speedometer to understand how seriously fast this vehicle is. Just by watching it going out of a parking lot, almost sideways, you start to comprehend that this could potentially be a contender for the Urus.

Looking at the 62 mph to 124 mph data, we have to admit that 6.46 seconds is quite impressive. A stock Lamborghini Urus is over 2 seconds slower given the same test. Things start slowing down a bit after 124 mph, but that's what you get with a car as big as this.

But there's one more test left. Some sections of the Autobahn still don't have a maximum speed limit, so it would be a shame not to see how fast the X3 M Competition can go. The fastest Lamborghini Urus we've ever seen could go as fast as 200+ mph (321 kph), but this BMW still needs some more upgrades before it can break the 180 mph (289 kph) barrier. 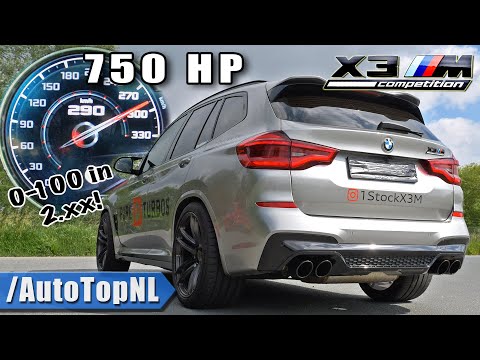