4 Harley-Davidson Cobra Dons the Snake’s Brown Coat, Even Has Its Hood

Jaguar F-Type Will Get Anniversary Edition, Will Be the Last With Internal Combustion

$74K Harley-Davidson “Stryker” Is Not Your Average Road Glide Special

Harley-Davidson’s lineup of Grand American Touring motorcycles presently comprises eleven models. That includes two Kings, the Ultra Limited, and a wide offering of Glides meant to satisfy pretty much every taste. But what the Harley lineup of such bikes lacks is the extremely expensive two-wheeler we have here.
7 photos

Originally a 2021 Road Glide Special, the bike fell into the hands of former NASCAR driver Rusty Wallace’s crew, the mighty Southern Country Customs (SCC). It obviously got transformed into a more potent self, and with the changes made, the thing’s price leaped from under $30k to a breathtaking $74,500.

As the shop’s most recent project, the grey and orange machine got, of course, a series of modifications meant to justify the hike in price.

First up, the Road Glide's 114ci engine got tweaked with the inclusion of an upgraded cam, beefier intake, and a custom exhaust made in-house by SCC. Then, the front end got modified to accommodate the huge 26-inch wheel, which like some other bits and pieces on the two-wheeler, comes wrapped in something called Stryker Orange - hence the nickname we chose for the custom Road Glide.

The mostly nardo grey Harley rides on a full air suspension and makes use of an electric center stand. For the road needs of the rider, the audio system was significantly updated, and it now comprises new speaker lids hiding Iron hardware from Soundz and extra amplifiers.

Now, you may think the over $74k asking price for a custom Road Glide might be a bit of a stretch, but make no mistake about it, there’s a market for such things. Just so you know, both the other SCC projects we already talked about here on autoevolution, the $64,500 Street Glide Special and the $73,560 Road Glide, are already listed as sold on the custom shop’s website. 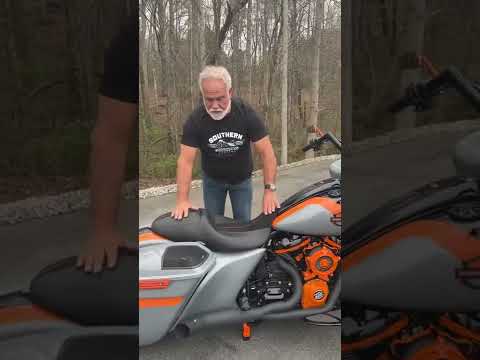