1 Tesla Model S Crashes in Germany, Firefighters Respond to the Case like Pros

Vlad Mitrache
Face it, you weren't at ease either the first time you allowed the active cruise control to brake for you. You had your foot hovering above the pedal, and your brain was more focused than ever, just like it gets in those short moments before an accident.
1 photo
Some of us find it hard to entrust our lives to the man or woman sitting behind the wheel, and we know that person. In some cases, we're even married to them. And yet, we still feel a little cringe every time we get in that passenger's seat. A self-driving car will make no difference between any of the seats in a car, since human intervention will no longer be necessary.

We haven't gotten there yet, but we're damn near close. With systems such as Tesla's Autopilot, the car is virtually driving on its own on highways, with the single restriction of not changing lanes on its own volition. But if you're happy to stick to just one lane no matter what, you could theoretically go to bed without a worry in your life.

Now think of the people who were born in 1946. They were lucky enough not to experience the war, but they've been experiencing so many transformations during their lifetime that it's hard to accept the things that are possible now. And while some have stayed in touch with the technological advancement more or less, and so they at least know (in theory) what to expect, some will have their brains shut down automatically to prevent damage if they try to think about how augmented reality works.

I'm guessing the lady in the clip below belongs to the latter typology. She is, nevertheless, a driver, despite her 70 years of age, and she has a son who likes Teslas, so he surely must have gifted her a laptop, a Kindle or maybe even an iPad for Christmas at some time. So she's not completely in the dark. However, having a palm-held device that you can use to check the weather and sitting in a car that's driving itself are two totally different things.

Her son thought it would be funny if he put her behind the wheel and then engage the Autopilot as the car cruised down a highway. He wasn't wrong. His mom was clearly both frightened and delighted, and this experience probably made her feel like a kid again. There aren't a lot of things that can give someone this mix of fear and joy, of thrill and excitement that don't involve a long cord and a very high bridge. Bill, your mother is wonderful. 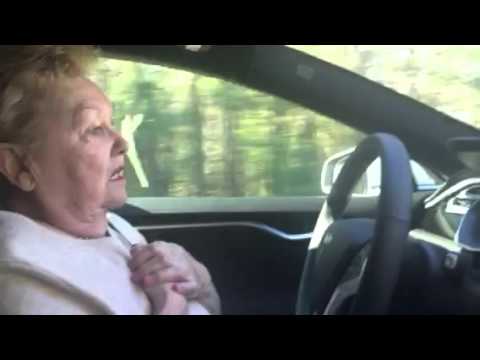