2 2023 Toyota Crown Will Look Like This, Probably Due at U.S. Dealers This Fall

5 Is the Hyundai Ioniq 6 a Genius Move or Just Another Unfulfilled EV Prophecy?
Car video reviews:
Up Next

Frankly, there is no other way to put it. The virtual automotive artist better known as carmstyledesign(1) on social media has the ‘bad’ habit of playing with both classic and modern heroes in crazy slammed and twisted widebody ways.
9 photos

No popular nameplate seems able to escape the (sometimes, tough) ‘digital love acts’ but the pixel master has devised a signature transformation style that – with proper attention to modified details – bodes well for most icons. And that is valid from crazy 1,000-hp widebody DMC DeLoreans that come back from a digitally slammed future to bonkers Lambo Aventador SVJs going on virtual road trips with digitally matched rooftop boxes and anything in between.

Alas, sometimes, just presenting a solo act does not seem to satisfy the imagination of the CGI expert. As such, after the recent modern silver hoots of a widebody slammed Chevy Camaro ZL1 and Dodge Challenger Hellcat that got our virtual muscles pumping, now it is time for a trio of vintage muscle cars to please classic ride fans. Actually, the artist does say this is dedicated to all “muscle car lovers,” so we can bet this is valid irrespective of age – and Detroit Three affiliation.

This is because the pixel master’s recent 1969 Mercury Cougar Eliminator digital project has been joined for this ensemble outing not only by an older 1967 Ford Mustang restomod but also a modernized 1969 Chevy Camaro Z/28 that should not be mistaken for a vintage Dodge because of its futuristic slammed widebody attitude or the cool double-headlight visuals.

Interestingly, all three of them marvelously bode well together, showing these old muscle cars can get along just fine – especially when treated to about the same modern technology goodies. Of course, everything is merely wishful thinking, which is kind of sad! Frankly, those three would look like absolute hoots rolling down the streets with their modernized slammed widebody attire and roaring V8 engines, just like it digitally happened in the second video embedded below! 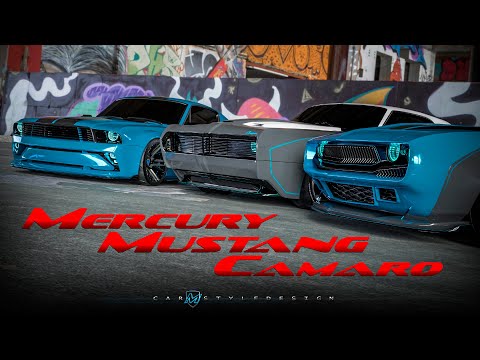