5 Mercedes-AMG E63 vs. Nissan GT-R vs. Audi RS7: a Drag Race Full of Surprises
Car video reviews:
Up Next

The one thing drift cars and those prepped for drag racing have in common is that they both need engines with a high power output. However, this is where similarities end because while one needs to maintain optimal traction throughout the race, the other looks to break it with every chance it gets.
7 photos

Both disciplines are spectacular in their own way, but you would never see a drag-specced car try its hand at drift racing, nor the other way around. Well, that's because people usually go into these competitions with the intent of winning them. If you take things more lightly, though, then you realize there's plenty of fun to be had.

It's not just the vehicles that will find the transition difficult. The drivers would have to evaluate their skills as well and decide for themselves if they feel up for the switch. A drag race may seem like a simple affair, but unless you're driving a Tesla which does everything for you, it might not be such a walk in the park. As for drifting, that's even more obviously demanding on the driver.

This guy here decided he needed the diversity, so he took his Nissan Skyline R33 (it's just the front that belongs to an R34) he uses in drift competitions onto the drag strip. His car sends 663 hp, and God only knows how much torque to those poor rear wheels, so the last thing he needed was a wet track.

Obviously, that's exactly what happened. Needless to say, he didn't set any new records, but watching him struggling to keep the car straight and carefully dosing the throttle to maintain traction is quite an exhibition in its own. You can clearly see it's a fast car, it just can't put all that power on the road in an efficient manner.

But if you thought his car was the weirdest one there, guess again. Around the 45-second mark, we get to see the only opponent the Nissan managed to beat in this video. It was called the world's ugliest car on many occasions, and that was without sporting this green and yellow color scheme with flames on the hood. It's the mighty Fiat Multipla, an Italian MPV that has no place on the road, let alone on the drag strip. Hmm, that sounds like the perfect body for a sleeper... 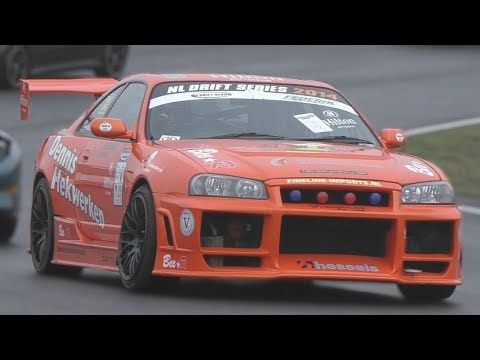