1 $610 Million Solaris Yacht Is Nearing Completion, Will Be World’s Most Powerful

2 This $30 Million Floating Villa Is an Endless Holiday, Wherever You Want It

5 The Ocean One Concept Is an Ocean Liner That Grew Up Into Stunning Superyacht
Car video reviews:
Up Next

1969 Chevrolet Camaro Parked Under the Clear Sky Fights for Survival

$610 Million Solaris Superyacht Hits the Water for the First Time

On a very misty late-February morning, one of the biggest and most impressive vessels of the past couple of years was launched. We're talking about Solaris, the 460-foot (140-meter) superyacht by Lloyd Werft.
10 photos

The launch took place at the Bremerhaven shipyard in Germany, where construction on the hull was underway. It is shown in the video at the bottom of the page, though, to be fair, it hardly does Solaris' justice given the foggy conditions.

Solaris began outfitting in 2018 and, to this day, remains shrouded in mystery. It is believed billionaire and football club owner Roman Abramovich has commissioned it and that the total cost will be in the vicinity of $610 million. Since it’s a private commission, official details remain scarce.

Just last week, a fresh round of photos of Solaris at the shipyard emerged online, showing that it was nearing completion on the hull. There’s no word yet on the delivery date, but it could be in early summer, according to reports. Either way, by the end of the year, Solaris will be out sailing with its new owner.

Solaris has a total of eight decks and a massive interior volume of 11,000GT, with accommodation for 36 guests and 60 crew in a total of 48 cabins. Luxury amenities will be standard for a vessel of this class, including a helipad and vast beach club with a crane to lower the toys to water, both of which are visible in the launch video.

One thing that sets Solaris apart, besides the estimated price tag and sheer size, is the fact that it will be one of the most powerful superyachts in the world. Superyacht Times reports that power comes from two ABB 9-megawatt azipods, the most powerful of the kind ever installed. Each unit can make a full 360-degree rotation, boosting maneuverability and efficiency and optimizing fuel consumption.

Roman Abramovich is also the owner of Eclipse, which remains the most expensive superyacht in the world, more than a decade after delivery. 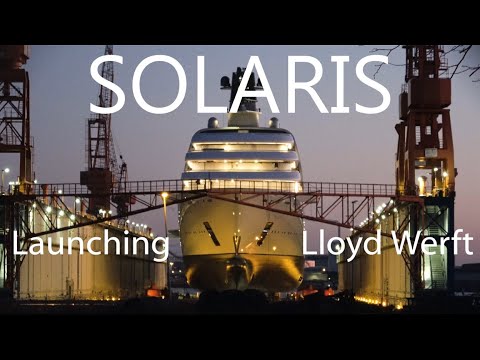