2 Nurburgring Sim Racing Shows How Fast the Corvette C6.R Is

4 Three C6 Corvettes Engage in a Virtual Challenge at the Nurburgring, Z06 Is Triumphant

5 Virtual Corvette ZR1 Tops Out at 144 MPH at the Nurburgring, It's Still Worth Racing
Up Next

Dragos Chitulescu
Before pulling the trigger on a new car, think twice about the function you expect it to fulfill. A BMW M4 could be quite fast at the racetrack, at least compared to a hot hatch or most sedans. But will it be able to outrun a proper sports car? And if you do get a sports car, how slow will that feel compared to a purpose-built race car? Well, that's what we're trying to find out today.
41 photos

Today is the last day of Corvette Month here on autoevolution and what a fun journey it has been! We've done quite a bit of virtual testing at the Nürburgring, thanks to Assetto Corsa, in an attempt to rank several Corvettes from slowest to fastest. As you'd expect, the race-ready models have pretty much topped the charts so far.

But we knew there was one final car we needed to have a look at. Now, going back to the idea we started earlier. A BMW M4 will probably be slower than a sports car around the track because of the way it was designed from the get-go.

BMW didn't focus on creating a race car out of the 4 Series, instead, they need a sporty and luxurious vehicle for the road. Yes, the M4 has a tonne of improvements to the standard car, but it cannot hide from its origins.

Now, a road-going Z06 or ZR1 are going to be insanely fast if you have the courage and the skills required to push them to their limits, but they'll be slower than a C7.R or a C6.R for instance. They say that there's always a bigger fish. And you need to keep in mind that even a C7.R originated from a regular C7.

And there's one car we knew would make a fool of the C7.R around the Nürburgring. Enter the Corvette Daytona Prototype, a race car that Chevrolet started using in 2012. Dallara, Coyote, or Riley provided the steel tube frame, while NASCAR experts ECR engines came up with the powertrain.

And that would be a 5.5-liter LS-based small-block, which according to the in-game stats should provide a maximum of 598 horsepower and 537 lb-ft (729 Nm) of torque. The people over at IER Simulations developed this mod for Assetto Corsa, and it seems that we'll be driving the 2014 model, which had a six-speed sequential manual gearbox.

With that function activated, we would race this car on the Nordschleife by night and with an outside temperature of just 39.2°F (4°C). But we were pretty sure that there would be more than enough grip considering the 305/25/R18 tires up front and the 310/35/R18 ones in the rear and the aero package on the Coyote Corvette.

There are six different liveries to choose from, but the Whelen Racing appealed to us the most. There's not much you can tell about the car's design when it's dark outside, but it does feel a bit cramped on the inside. As good as the headlights might be, it's still quite tricky to drive at night.

Going into Hatzenbach at over 124 mph (200 kph) will make you understand once again how crucial it is to have proper track knowledge before going all out. Driving on the Nordschleife during the day is already risky business, but doing so at night can be a bit nerve-racking, even when you know it's just a video game.

There is so much downforce and grip with this car! You'll find yourself performing the unimaginable: going flat out through sections like Flugplatz and Aremberg. The car is quite stable most of the time, but you can find yourself going sideways if you won't drive it the way you should.

One word of advice: stay off the curbs! This is a proper race car with minimum ground clearance, and it will punish you for trying to go over any elevated section of the track. One of the cool things you'll notice when you're in the Coyote Corvette is that the Nordschleife isn't quite perfectly smooth.

You'll see sparks coming out of the car every few seconds, and you can feel how bumpy the asphalt is through most of the layout. But that just makes the whole experience a whole lot better, and we can only imagine how fun it would be to drive this thing in VR. During the night run, we stopped the watch at 7:11 on our very first lap!

But we pushed things even further on the second lap and got it down to 6:57. Still, we were aware that switching to ideal track conditions will render a better result. We ran a 6:51 on the first day lap and shaved another four seconds on the second one.

But who are we kidding here, if you're a pro with a good sim racing rig you can probably go the whole distance in six minutes flat. Anyway, here's a video of the fastest night lap below. Let us know if you've managed to beat our time when you get the chance! 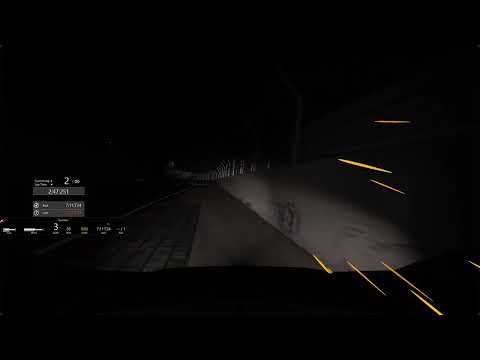