3 This Could Be the Shape of U.S. Army’s Next Optionally Manned Fighting Vehicle

5 Autonomous Mission Master XT Is an All-Terrain Wizard, Tires Are to Blame
Up Next

59-Ton KF51 Panther Main Battle Tank Unleashed in Europe, Not Yet on the Battlefield

Daniel Patrascu
These days, Paris is the place where an international defense industry trade fair called Eurosatory takes place. Given the current state of things on the European continent, pretty much everyone there is looking anxiously at what the future of military weaponry looks like. And the Rheinmetall Kettenfahrzeug 51 Panther (KF51) is one of the most impressive examples of that future.
20 photos

The German defense contractor pulled the wraps off the main battle tank on Monday, and spilled online pretty much all the details needed to paint a pretty comprehensive picture of the weapons platform.

The 59-ton tank is supposed to be according to its maker a “game-changer on the battlefields of the future.” And that’s quite the statement, given the beating tanks are getting over in Ukraine, at the hands of simpler drones and anti-tank missiles.

Meant to take on the roles of both hunter-killer and killer-killer, the Panther is equipped with something called the Future Gun System. It comprises a 130 mm smoothbore gun backed by a fully automatic ammunition handling system and an autoloader capable of holding 20 rounds. These rounds can be either kinetic energy shells or programmable airburst ammunition. Right beside the cannon sits a 12.7 mm coaxial machine gun.

Despite the capabilities of these weapons, they’re not something unheard of when it comes to tanks. So Rheinmetall upped the ante by giving the KF51 the ability of beyond direct line of sight strikes, by using an Uvision turret with loitering munition.

On the defensive front, the tank packs “active, reactive and passive protection technologies.” They include a Top Attack Protection System (TAPS) to fight threats coming from above, smoke and obscurant systems for concealment and are fully shielded against cyber attacks. It also comes with drones attached for better awareness.

The Panther is designed to be operated by three soldiers (commander, gunner, driver), with room for a fourth if need be. According to its maker, the tank can travel for as much as 500 km (311 miles) on a single load of fuel. Top speed was not disclosed.

Rheinmetall did not say when the KF51 Panther will be ready for deployment in active service, or which countries will get it. 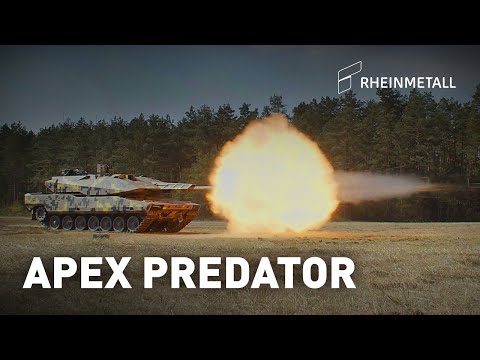