2 Wild Fox Body Mustang Boldly Challenges 1,100-HP Integra, It's Not Even a Race

Dragos Chitulescu
The most recent drag racing series organized by Hoonigan have had Hondas competing against various other machines, intending to silence the haters. And for the past few episodes, VTEC power reigned supreme. But the guys have come up with a new challenge, which might not provide the same result. Either way, you can never fully silence all the haters, as this type of attitude isn't necessarily governed by common sense.
14 photos

If you're going to compare a modern Honda Civic Type R with an older model, chances are that the new car is going to come out on top. At least if you don't look at it from a sentimental point of view.

A stock RX-7 could be about 300 lbs (136 kg) lighter than the Type R, and it's also an RWD car. A quarter-mile (402 meters) battle between the two bone-stock vehicles would be tight, to say the least.

But we're looking at the Hoonigan playground, and there are rarely any unmodified cars here. Today's 2018 Type R has been upgraded to about 550 hp, and it weighs 3,200 lbs (1,451 kg). Just like the Mazda, it uses a six-speed manual transmission, and it relies on some serious rubber to provide adequate grip levels.

The owner of the Mazda hasn't gone down the rotary path, which might attract some negative reactions from the Wankel community. But the solution he's found is not bad at all.

The Toyota-sourced 1JZ-GTE engine is now rated for 632 hp, which is quite a bit more than you'd get with a regular 13B. The FD3S is also about 200 lbs (90 kg) lighter than the Honda, and with RWD at hand, this can only go one way. The FK8 might be more comfortable and reliable, but it's nowhere near as exciting as the classic '90s JDM machine.

Either way, this is a drag race, not a beauty contest so let's get on with it. The finish line is exactly 1,000 ft (304 meters) away, and both cars are off to a good start. But it's all over by the time they shift up to third gear: the FD looks like it's about to take off and wins the first run, hands down.

As this isn't an NHRA-sanctioned event, the hosts are more flexible when it comes to adjusting the race format for a more exciting outcome. And so, the Honda driver asks for a roll-race to the 1,500 ft (457 meters) line, which is his specialty.

That doesn't sound like it's going to do him any good, but to each his own. The RX-7 comes out on top yet again, but the gap is smaller this time. But this is because the FD driver missed a gear, which allowed the FK8 to catch up right before the end. At this point, it's all settled, and the "Haters" have won this round. Even so, there's a third run saved for last, but we won't spoil the outcome for you. 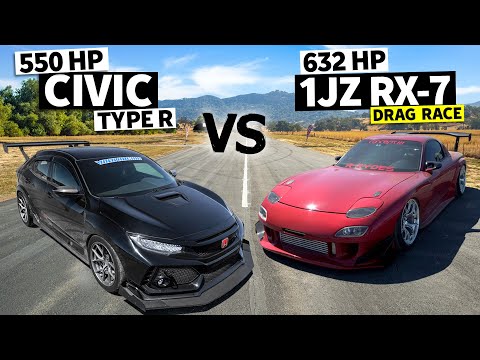