4 Jeff Bezos Reaches Out to NASA, Offers $2B in Exchange for Moon Lander Contract

5 Jeff Bezos Gets Mad (Again) at NASA for Favoring Elon Musk, Promises the Moon
Up Next

Daniel Patrascu
This year marked an unprecedented surge in human-made technology being sent to another world. Aside from the American and Chinese rovers that landed on Mars, we’ve also had a (tiny) helicopter going there and doing all sorts of incredible stunts over the past few months. But even with all this modern-day sophistication, we’re still very far away from the achievements of the people involved in the Apollo program half a century ago.
6 photos

On August 2nd, 2021, NASA marked the 50th anniversary of Apollo 15’s “third and final cruise on the lunar surface using a wheeled vehicle.” A tremendous achievement back in day, and a sad reminder we were unable to replicate even this aspect of Apollo program since.

NASA sent the first crew to the Moon, Apollo 11, in 1969, and the famous words spoken by Neil Armstrong as he set foot on the surface ushered in about three years of heavy traffic by means of spaceships between our planet and its satellite.

Exactly a dozen men stepped on the Moon’s surface as part of six missions that made it there (a seventh, Apollo 13, failed to land), but fewer were lucky enough to drive what can easily be considered the greatest (and simplest) vehicle ever constructed: the Lunar Roving Vehicle (LRV).

Built not to go off-road, but off-planet, the LRV is a Boeing design, the first purpose-built wheel-driven vehicle to take to the skies, and the only one of its kind to carry people around on the surface of a world other than Earth. Having cost around $38 million (that would be roughly $258 million in today’s money), it became essential for three Apollo crews to perform their duties much better than their predecessors.

The members of the Apollo 15, 16 and 17 missions are the ones who used the rover to drive around on the surface of the Moon, and NASA considers the machine essential for the “major scientific discoveries” of these adventures.

But what was the LRV?

The 210 kg (463 pounds) machine was meant to carry around two crew members and some supplies to a distance of several miles beyond the landing site. It could move more than twice its weight on a 2.3 meters (7.5 feet) long wheelbase, on top of which sat some sort of a frame made of aluminum alloy.

Power for the rover came from two 36-volt silver-zinc potassium hydroxide non-rechargeable batteries. The batteries sent their juice to four DC electric steering motors, one for each of the four wheels, and each developing 0.25 horsepower.

Astronauts controlled the rover by means of a T-shaped stick, which could turn each set of wheels in opposite directions, giving the thing a steering radius 3.1 meters (10 feet). The same stick was used to command steering and acceleration/deceleration - forward for forward, left for left, backward for brake.

As said, three Apollo missions used the rovers, each taking to the Moon their own machine. In all, six men drove around in such a contraption, namely David Scott and Jim Irwin (Apollo 15, the ones NASA is celebrating these days), John Young and Charles Duke (Apollo 16), and Eugene Cernan and Harrison Schmitt (Apollo 17).

The rovers covered a total of 22.30 miles (35.89 km), and even if that might not seem like much traveling being done, consider the fact that before its use, the Apollo 11 crew only manage to cover about half a mile on foot during their stay on the Moon. The machines have been left behind on the Moon.

Now, the world is looking forward to the launch of the Artemis program. It too will make use of a rover, one called Lunar Terrain Vehicle (LTV) and developed by GM and Lockheed Martin. But that's another story for another time. 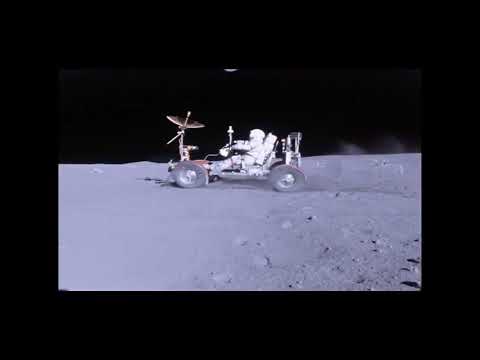 What If Bugatti Made Other Stuff, Like RVs, Semis, Muscle Cars, Vans, and SUVs?See all coverstories