2 Best Five Automobiles For Winter Camping Trips in the U.S. This Winter

5 Dakota Customs Hellcat Wrangler Conversion Priced at $56,000
Up Next

Home > News > U-turn
Vlad Mitrache
Most of us don't really think about our own funerals until we feel the moment is getting closer, but by that time, we're just old men with old ideas who can barely move and only find enjoyment during bingo nights.
8 photos

That's why most funerals are extremely boring affairs. There's also the misconception that funerals need to be sad, as if the person passing away would roll in their grave if those left behind didn't cry their eyes out, not to mention actually dare to have some fun.

Well, if you saw this funeral proceeding in the Taiwanese city of Chiayi, you would be forgiven for thinking it was some kind of Liberty Parade or something. There were over a hundred vehicles involved, but 50 of them were brightly colored Jeeps (even though, given the proximity to China, they could be Wrangler knock-offs) with poles sticking out of their roofs.

If that's not weird enough, then the fact there were also girls attached to those rods would definitely boost this on the bizarreness scale. The barely dressed pole dancers were just part of the impressive funeral procession which also included a marching band, performers dressed as deities, and giant puppets.

The man whose death made all this possible was local politician Tung Hsiang. The councilor was an active public figure for decades before meeting his demise last month, aged 76. However, his funeral probably became more famous than everything he did during his life as the videos went viral all over the Chinese internet.

Such a massive manifestation led to traffic jams as mobs of people followed the procession, but nobody seemed to mind. The people watching this online were even more entertained, with one of them jokingly wishing Mr. Tung would die one more time. He was probably very curious to see what his funeral 2.0 would look like.

According to the BBC, Mr. Tung's family explained their decision by saying he liked to live his life "having a lively fun time," so they figured they'd keep that attitude after his passing away too. The funeral's online reception is all the more surprising considering having dancers - and even strippers - at this type of events isn't entirely uncommon in Taiwan. It's just that nobody thought about having 50 of them sitting on top of Jeeps, probably. 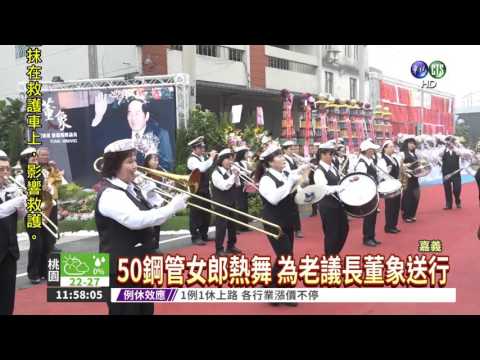