2 RS e-tron GT Challenges RS Q e-tron to a 1/4-Mile Battle, the Gloves Are Off

3 Ram 1500 TRX Finally Gets the Upgrades It Deserves, Meet the Apocalypse 6x6 Juggernaut

We know six-wheelers are big, sluggish, and expensive (think $300K for the 6x6 TRX Juggernaut or the also 6x6 Megaraptor). Sure, they may be looking at us from above, but they’re as good as oxcarts in terms of automobility capabilities. If you disagree, drive one to the nearest school and pick up some first graders. Without a ladder, that is, and without temporarily putting a halt on the traffic. So the only reason this type of automotive side-effect exists is to show off and go nuts on your wallet.
22 photos

However, here is one six-wheeler that falls under a different equation of fun-to-size ratio: the Ferox Azaris. A futuristic-looking machine, the Azaris hosts clever engineering, making it light-weight, performant, and easy to park simultaneously. It can be either an EV or a fossil vampire, but the power train is plain insane. It is a four-wheel drive and a rear-wheel drive simultaneously, thanks to its four wheels at the back. But the nerdy part is that it has four hydraulic motors inside each wheel. Extremely light-weight – the motor assembly is 100 lb (45 kg) combined, and the motors output 2,000 lb-ft (2,720 Nm) of torque in between them.

The geek-captivating part about the motors is that they are fluid driven via a hydraulic system fed by a central injection mechanism. If you really want the details, the system operates within the 200 PSI to 1,500 PSI range (13 -103 bar). Basically, you have one pump that pushes a liquid down the coaxial tubbing, and that liquid revs up the motor bolted in each wheel. Dubbed Fluid Vectoring, the technology has several major advantages, according to its creators: “Using the Ferox fluid operating system to compress a gas to high pressure, such as nitrogen within an accumulator, the system stores an “explosive” force which can be used for acceleration and other purposes.”

Unlike conventional wheeled vehicles, the Azaris suspension is unique in design. Each pair of back wheels is interconnected by a rocking arm, with better terrain response and smooth ride quality. The self-entitled “Liberated Wheels” concept is said to provide greater freedom and capabilities by getting rid of the drivetrain altogether. The primary power source can be a classic combustion engine, an electric motor, a hybrid system, or a fuel cell. The only setback for this Martian Rover-looking buggy would be its price tag, estimated at $320,000. Which puts it right next to the other six-wheelers we mentioned at the top of this article (read more about them here) 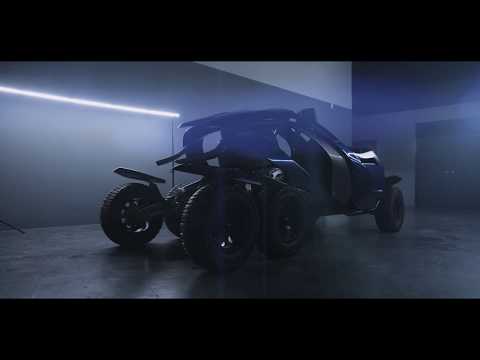