3 SEAT Leon vs. Honda Civic vs. Hyundai i30 Race Has No Hot Hatchbacks

Vlad Mitrache
Before the Tesla Model S P100D came along, all you needed to boss an amateur quarter-mile drag race competition was a car with about 500 horsepower and a decent four-wheel-drive system.
1 photo
Of course, other factors such as the transmission (we've seen manuals don't do very well against modern automatics), the vehicle's weight or the driver's skill also come into play, but those two were usually the ones that made the difference between winning or losing.

The pair of cars involved in the race below both tick the two checkboxes, with just the Nissan falling slightly short of the 500 hp mark with its 485 hp. But it's a Nissan GT-R, so that badge alone should be enough to make up for the handicap.

And, to be fair, there's quite a large gap to fill. The Lamborghini Gallardo LP560-4 has 75 extra horsepower, which is roughly 15 percent more. Considering it too has a proven all-wheel-drive system, this race appears to be slightly tilted in one direction.

The disparities don't stop here. First of all, the GT-R is a Japanese sports car while the other is a purebred Italian supercar. The Nissan uses a turbocharged V6 engine, the Lambo a much bigger naturally-aspirated V10 and despite that, the Italian is still considerably lighter with a 240 kg (530 lbs) advantage. Finally, one costs more than a house, the other one doesn't.

All this points toward only one winner, and that's the Lamborghini. It's got more power, less weight, and is just as capable off the line. And yet, when the race begins (it's worth pointing out they used a rolling start), it's the Nissan that pulls away first.

It all has to do with that big engine in the Gallardo. It gets its maximum output at 8,000 rpm, and while naturally aspirated engines do tend to spool up quicker, it's still 1,600 rpm over the GT-R's sweet spot. And had they race from a standstill, we suspect the Nissan would have inched forward even more convincingly, thanks to its low-rev torque delivery and very famous grip.

In the end, it all went the way it was supposed to, but not without a brief initial scare. We're sure GT-R fans aren't going to take this lightly and will probably come up with an excuse, or point toward the price difference or the bigger engine, but we love them nevertheless. 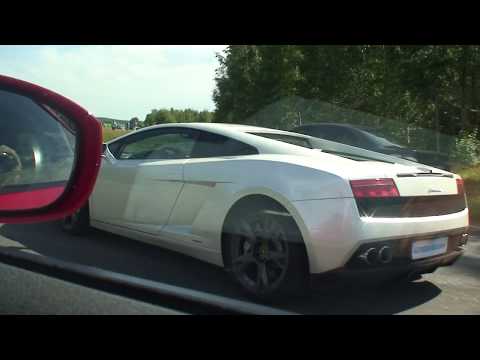