At the present moment, Hennessey Performance Engineering owns two Hellephant crate engines. According to founder John Hennessey, the supercharged V8 mills will go into a three-row SUV and a pickup.
30 photos

Of course, the swaps are made that little bit more special by the donor vehicles. In this case, we’re looking at the craziest variants of the Dodge Durango and Ram 1500, namely the 710-hp SRT Hellcat and 702-hp TRX.

At the end of the following video, John mentions that both Hellephant-swapped vehicles “will be taken out and raced against the Porsche 911 Turbo S and things of that nature. This is the beginning of some really cool stuff.”

Called this way as a tribute to the Hellcat supercharged V8 and the 426 HEMI “elephant engine” that dominated NASCAR, NHRA, and AHRA racing in the 1960s, the Hellephant was revealed in October 2018 by Mopar along with a 1,000-horsepower 1968 Dodge Charger restomod. Priced at a whopping $29,995 plus $2,265 for the engine kit, the 7.0-liter motor flexes a 3.0-liter supercharger that shoves 15 pounds of boost into the combustion chambers translating to 950 pound-feet (1,288 Nm) of torque.

The order books for the Hellephant opened in April 2019, and two days later, the initial run of 100 units was already sold out. Compatible with pretty much any pre-1976 car and workhorse, the force-fed lump can be purchased from third parties as well for prices exceeding $30,000.

As for the reason the Hellephant is designed for pre-1976 vehicles, that’s because old cars and trucks do not need to undergo emissions testing. That presents a bit of a problem for Hennessey with the Dodge Durango SRT Hellcat and Ram 1500 TRX, but Hennessey will swap the engine anyway.

To whom it may concern, the go-faster shop from Texas already offers 1,000-horsepower upgrades for the Durango and TRX based on the Hellcat engine. Only 50 units of the HPE1000 Supercharged Upgrade will be produced for the 2021 model year as far as the utility vehicle is concerned. Meanwhile, the off-road pickup truck will number 200 examples if Hennessey can find 200 customers who are willing to spend $135,350 including the donor vehicle. 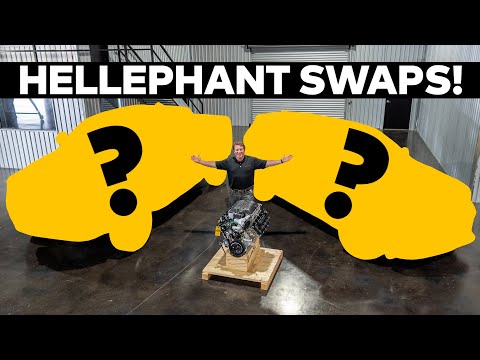