2 Volkswagen Celebrates a Very Special 75th Anniversary, Care to Guess Which One?

Aurel Niculescu
Although Volkswagen isn’t exactly the first brand that comes to mind when discussing capable pickup trucks, its European Amarok is undoubtedly a force to be reckoned with by the competition. The Ford Ranger, Nissan Navara and the lot are usually considered its rivals, but this time around, it’s a different kind of (track) story.
31 photos

As far as capabilities are concerned, Volkswagen strived to instill just about everything into the Amarok. It can go into the woods, over rocks, tow heavy stuff, get lots of stuff inside the bed... and still take its owner for a night at the Opera after it gets treated to a healthy dose of detailing.

Still, we’re pretty sure VW engineers and designers never imagined the Amarok would be up for some (not so) casual laps around UK’s historic motorsport circuit of Donington Park. However, when someone has a lot of faith in the aftermarket side of things, wonderful things can happen, including having a track blast in a workhorse pickup truck.

Darkside Developments is a British tuning company that specializes in performance enhancements of all things diesel for Volkswagen and BMW. It claims to have expertise in providing “the best performance gains, whilst still maintaining the reliability and economy associated with a diesel engine.”

We’re not so sure about the reliability part and we bet the economy issue was sent down the drain, but at least the performance was thoroughly tested in the company’s recent video (embedded below).

Because the customer seemed to trust them a lot, they were allowed to play with a recently upgraded VW Amarok on the track. As far as we can tell, the German pickup truck was taken from stock condition to no less than 400 horsepower – which is almost double the amount of the flagship V6 version. This is Stage 3 of the tuning company’s offer, which also has options for 300 and 350 hp.

Thanks to a behind-the-scenes look at the VW Amarok while at the Darkside headquarters, we know the pickup truck also received additional modifications to better cope with the new power level. Those include a bespoke lowering kit and beefier brakes. Interestingly, both aren’t hugely expensive upgrades, coming in at £1,750 (before VAT) (approximately $2,403) and £1,800 ($2,472), respectively.

Everything was put to great use while thrashing around the hulking pickup truck on the Donington tarmac, as exemplified by the close-up action. The latter includes not only serene passes with the Amarok leading an eclectic ensemble of cars but also some great POV footage from inside the cockpit – both from the Amarok and the company’s MINI that was probably there for assistance and to serve as chase car.

No need for that, actually, because the Amarok quickly found another target - someone was also hitting the pedal to the metal in a BMW X5 M50d. Not hard enough, as it turned out, because the chase was brief and the Amarok managed to calmly pass the Bavarian SUV at the 3:55 mark. 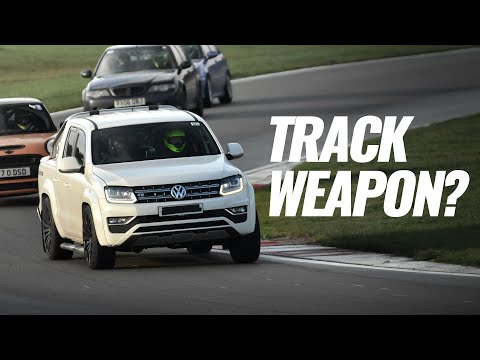 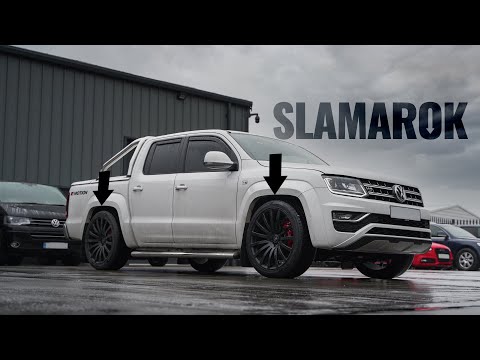