Chilling in the pool while an RC (radio-controlled) boat serves you drinks, snacks, and plays your favorite tune. That’s what lazy summers are all about.
6 photos

Thank God for 3D printing, as it can make almost any dream come true. This guy wanted to come up with a device that can maximize his pool time because you can’t really relax if you have to get out every time you run out of beer or snacks.

Luckily for him, Alister is a resourceful engineer who knows his way around CAD design, 3D printing, and electronics. In fact, he’s got an entire YouTube channel dedicated to his inventions, and most of them are built with a 3D printer.

The goal here was to make an RC boat that delivers snacks and beverages, and he got his inspiration from the Snack Float, manufactured by Excalibur Electronics. It could carry up to five drinks and snacks in the center and it was operated by a radio-controlled unit that used one 9V battery and 6D batteries. Unfortunately, though, the company went out of business, so Alister had to put his knowledge to good use and build his own version of it.

His “pool waiter” has a payload capacity of four bottles and snacks, with the latter being placed in the center. The boat uses brushless thrusters and in order to float, the 3D-printed material has a resin overcoat.

And for extra coolness, the engineer added a water cannon, a sound system, and a pirate flag, with all of them being operated remotely.

Alister controls the device using a transmitter with differential thrust for the movement of the boat, and there are also switches at hand for controlling the water cannon, MP3 player, and flagpole.

Printer-wise, he used Creality CR-10 and Ender 3 Pro 3D printers for the bigger parts of the boat, and a Creality ld-002r resin printer, for the smaller components. 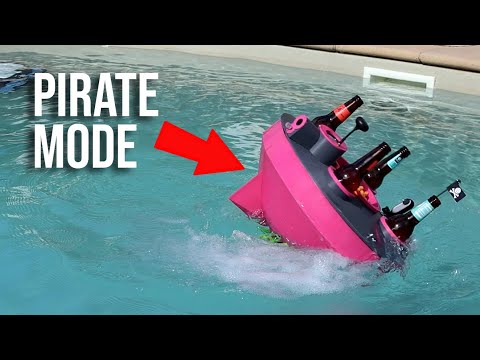