3 Toyota GR Yaris Goes Rallying After All, but There's an Australian AP4 Catch

Home > News > Tuning
Aurel Niculescu
The second-generation Toyota Tundra (XK50) is a force to be reckoned with for the competition in its stock configuration. But what happens when the owner wants both more power and enhanced off-road capabilities? Well, there’s an interesting answer coming from Vivid Racing’s own YT channel that involves a bit of dyno testing and a lot of enjoying this “big bad boy” Tundra.
21 photos

Toyota has presented the second-generation Tundra some ages ago (in 2006 for the 2007 model year), and even the refresh came out all the way back in 2014. That means there’s been years of development across the aftermarket sector and lots of time to find out what fits best for different use case scenarios.

Apparently, some people have opted for a blend of rock-crawling capabilities and street performance credentials, with Vivid Racing’s latest feature on social media showcasing what happens when a customized 2016 Tundra hits the dyno in a couple of interesting configurations.

It’s the same company that just released its $600 upgrade for a 305-horsepower Bronco Sport into the wild, and it’s been working on tuning all sorts of SUVs and trucks for a while now. One of its best mods for Gladiators, Tacomas, 4Runners, and Tundras is the Magnuson TVS1900 supercharger system, which is also available for the latter’s 5.7-liter V8 engine.

This crimson Tundra has the $6,995 kit already installed, and the guys from Vivid Racing were called upon to check out how much rear-wheel horsepower this 550-horsepower mod actually makes on the dyno stand. The readouts (check them out from the 1:50 mark) look great for the hulking truck in its regular 20-inch wheel configuration, with the supercharged kit delivering around 450 rwhp and some 520 lb-ft (705 Nm).

Even more interesting is the rotational weight lesson we’re given next (from the 3:40 mark), as the Tundra also gets on the dyno wearing its “big bad boy” 38-inch rock-crawling sneakers. There’s a difference to be expected, with the truck now packing around 404 rwhp (minus 41 ponies) and 484 lb-ft (656 Nm) because there’s also upgraded gearing to reign down on the torque loss.

Of course, what’s an automotive vlog without some driving around, so Vivid also gives us a few street passes along with a glimpse at the truck’s off-roading capabilities while the host even comes out impressed by the rig’s average fuel economy. 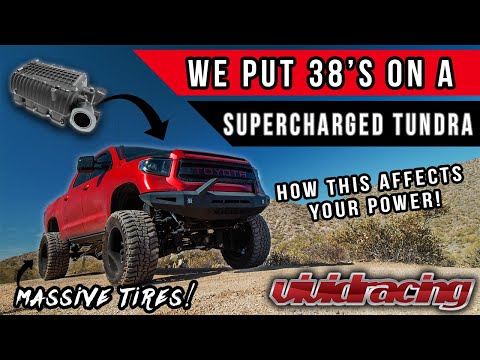