2 A 1930 Henderson-Inspired Honda Shadow to Leave You Speechless

365-Pound Rider Shows the Real Potential of the BMW S1000RR

Florin Tibu
If someone asked you to describe a motorcycle racer, a 365-pound fellow wouldn't be the first thing you’d think of, would it? And not the second, third, or 100th thing, either. Still, here's a guy to prove to the world that being big doesn't necessarily mean you can't join the "knee down club."
1 photo
The guy is Chris Kramp, and weighs, according to his own account, no less than 365 pounds. This makes for 165.3 kg for the riders across the pond, and the figure is, doubtlessly, going to raise an eyebrow or two in the riding community.

Still, Chris doesn't seem to care too much about his weight and looks more preoccupied to ride as well as possible. Funny thing, he seems to be better at nailing the Mulholland Highway turns than a lot of riders half his weight or even lighter.

In fact, he is one of the rather few guys that can keep a steady pace around the Snake without hiccups and hesitations. And obviously, he does this knee-down style, making everything look easy as pie. Remembering all those who tried to go MotoGP around that very bend and failed because of their lack of skills makes Kramp look even better.

These are Chris’ own words, and we're totally okay with his choice. Unlike others who hop aboard a lite-class superbike just because they can and ride it way below its potential, Kramp seems to put the bike through its paces quite a lot.

We are still having a hard time coping with him aboard an S1000RR, most likely because guys like him are usually to be found astride large cruisers, rumbling at a slow pace through the neighborhood or along the highway.

Chris had his leathers custom-tailored by Comet, once again proving that when the passion is real and strong, amazing things can be achieved. Finally, hearing Chris saying that others find inspiration in seeing him ride is the icing on the cake. We can only wish Chris to enjoy his bike safely and keep showing to the world that life can be thrilling without having a picture-perfect body. 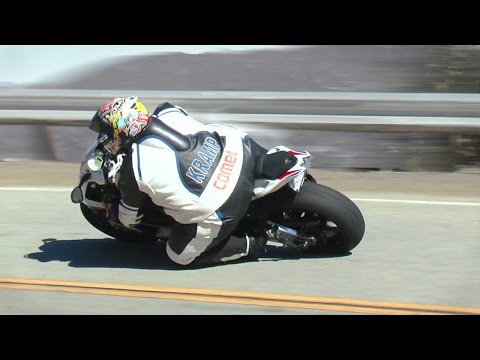