2 Tesla Driver Engages Autopilot on Highway, Goes to Sit in the Back Seats

5 Twin-Turbo Mustang Driver Would Rather Blow His Engine than Lose to a Tesla P85D
Car video reviews:
Up Next

No question about it, the Tesla Model S is the electric vehicle of the moment. Elon Musk’s creation only needed a few years to lift itself to cult-vehicle status and become one of the most sought-after cars in the world.
1 photo
Well, when we say “sought-after,” we mean that in an Internet search engine kind of way, because the actual demand for the electric sedan is still at pretty quiet levels, especially on the European market, which is proving a tougher nut to crack than anyone would have thought.

However, that doesn’t take anything away from the hi-tech features of the company’s best-selling model, and the same can be said about the latest addition to the range: the Model X, an all-electric SUV complete with four-wheel-drive, and most importantly - as you’ll probably agree - falcon wings-like rear doors.

With this very hi-tech image build around the vehicles, and considering Elon Musk’s reputation as visionary and so on, you would expect the places where these cars are sold to be something spectacular. The entrance door should be like a time travel device that instantly boosts you at least ten years into the future as you get in, and sends you back where you belong if you went out without buying a car.

The reality proves to be quite different. The Tesla Showroom you get to explore below (latest version of Google Chrome, Mozilla Firefox or Opera needed) looks like a very ordinary, 2015 at best, place. You could pull out the Tesla cars and replace them with offerings from any other brand, and they would fit in perfectly. There’s nothing there that says it is a place that houses the vehicle with the most technologically advanced powertrain of the moment.

Instead, there are plenty of stuff you’d expect to find in a showroom, from the classic “designer” chairs to the cold tile floor and the stands selling official merchandise at probably ridiculously high prices.

All in all, the experience, even though it’s just a virtual one, is a little underwhelming. Not only does it not look like a place that sells highly advanced vehicles but you also don’t feel like the cars there are worth in excess of $100k. But let’s give Tesla a break. It didn’t even want to use showrooms in the first place, so it’s pretty new at it. 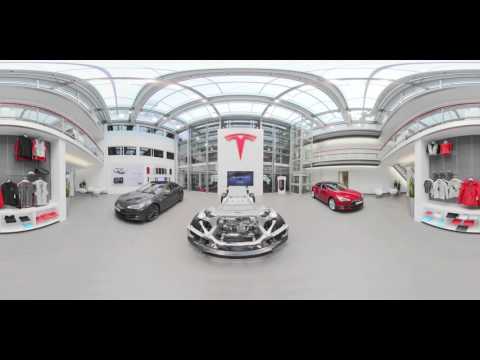