3 1971 Plymouth 'Cuda Hiding in a Garage Flexes Rare Color, but There's a Catch

Many of our readers are owners of second-hand sports cars they couldn't have dreamed of owning when they were new. We respect those kinds of people around here, but there are some pitfalls to beware of. Ones that feel more like gravity-bending black holes to your bank account if you don't have luck on your side. That's why we can't recommend Dave the Car Wizard on YouTube enough.

Three Grand To Fix Two Items? Welcome to the World of the Used Maserati Quattroporte V8

That said, the person who brought in this 2007 Maserati Quattroporte into Dave's shop near Wichita, Kansas, isn't the first time aspiring DIY Guru, from the way Wizard describes them. They're an experienced salvage car fix-er-upper looking to fix this beat-up exotic over time while hopefully saving money in the end by being meticulous and methodical about it. All while leaving the important stuff to Omega Auto Clinic's very capable hands.

At first sight, the exterior of this Maserati doesn't lend much evidence there may be anything drastically wrong underneath the shiny white paint and aftermarket 19-inch black rims. But as Wizard inevitably points out, and as so many of our readers who've owned used exotics have told us in the comments, looks can be deceiving. Just open the door, step inside, and find out for yourself.

Except for this time, Wizard did the favor for us and, within seconds, showing how the wood paneling where the climate vents and navigation screen sit was starting to separate from the rest of the dashboard. Now, this isn't strictly a late-2000s European car issue. Everything from Nissans to GM products of all varieties from around this time also had this issue, alongside this Maserati. Because the radio/infotainment screen is directly wired to the rest of the center instrument cluster, the whole unit has to be replaced in the case, like Dave's customer wants to replace the old screen. That's $500 to $700 down the drain without even popping the hood. Because Dave doesn't have access to Maserati's programming servers, that won't be getting fixed at Omega.

With scratched, decaying leather around the center console, a gear stick that spins freely more like an old Mitsubishi's than a Maserati, and the dollar signs keep racking up left and right without exiting the car. But it should, in theory, be worthwhile if the 4.2-liter Ferrari sourced N/A V8 engine under the hood is still singing with all the fervor of an AC Milan home game. Well, without a new set of engine and transmission mounts, the vibrations coming through the cabin are something that can't be ignored.

Indeed, engine mounts are some of the most common points of failure for this type of vehicle. In most luxury cars, modern hydraulically assisted engine mounts only add more to the total bill in parts and labor. Everything from Acuras to Land Rover and GMC Yukons from this period also used similar hydraulic mounts. So, once again, this is not an issue limited to exotic European cars. But in the case of this Maserati V8, they're at least $1000 a pop.

More damage was found to the front passenger side strut, which uses a principle called the Skyhook. A type of semi-adaptive suspension setup whereby a set of moving actuators keep the suspension as close to perfect in posture as possible over varied terrain. As if fastened to an imaginary hook in the sky. It was used in Maserati's proprietary adaptive shock and strut assembly from the mid-2000s. Because the customer requested a brand new strut with a warranty, it'll run them $2,000 before taxes and shipping to get this part installed.

Oh, and that doesn't even include the strut's lower bushing shipped in the same box as the rest of the part. Why not use the old bushing? You may ask. Well, it's about as structurally sound as an old newspaper. If that doesn't sum up the minefield that buying a European luxury car can bring you in a nutshell, we don't know what is.

Turns out, the bushings on one of the control arms turned out to be in no better shape. One had even been replaced while the one on the opposite arm was left to disintegrate. The result of it all? At least $3,000 in parts and labor before a single item of the derelict interior in this car is addressed. For some people, spending the money fix a car with this sweet of an engine and timeless looks is worth it to them. But as Dave points out so eloquently, you're probably better off spending the $20 grand extra for a nice one if there really is a thermite reaction occurring inside your wallet pocket.

Check back for more from V8 Month here on autoevolution. 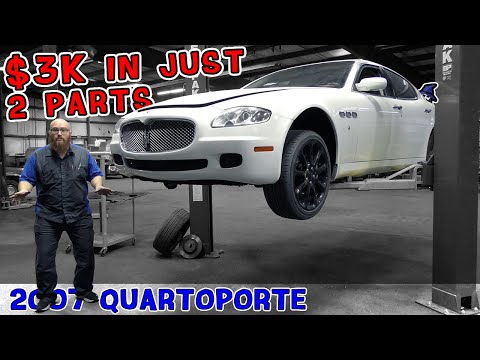