3 2020 Toyota Supra With Built 2JZ Guns for Four Digits on the Dyno, Has Old BMW Parts

4 2JZ-Swapped Lamborghini Gallardo Will Blow Your Mind and Ears

As a matter of fact, it might just be able to do that, as by the looks of it, both the Ford Mustang GT and the fourth-generation Toyota Supra appear to be stock.
6 photos

The two met at the Mission Raceway Park in Canada, supposedly not long ago, and the battle was filmed for the internet to see. You can check out the clip at the bottom of the page, yet before scrolling down and hitting the play button, we will remind you about the specs of both models, starting with the iconic Japanese sports car, which is also the much more valuable one here.

When it left the factory floor, the 2JZ, in the twin-turbocharged configuration, used to pump out as much as 325 brake horsepower in the range-topping flavor of the Supra in Europe and 5 hp less in Canada and the United States. The engine, which supports a jaw-dropping amount of modifications, as every petrolhead and their pet knows, was hooked up to a six-speed manual or a four-speed automatic transmission.

As for its ad-hoc rival on that day, the Ford Mustang GT, it uses a naturally aspirated 5.0-liter V8. The mill develops 450 hp and 410 lb-ft (556 Nm) of torque and works in conjunction with either a six-speed manual transmission or a ten-speed automatic. It joined the sub-4-second club a few years ago when it comes to the 0 to 60 mph (0-97 kph) sprint time, and it obviously holds the upper ground over the Supra. But can it actually beat it down the quarter-mile? Only one way to find out – or two if you check out the pics in the gallery. 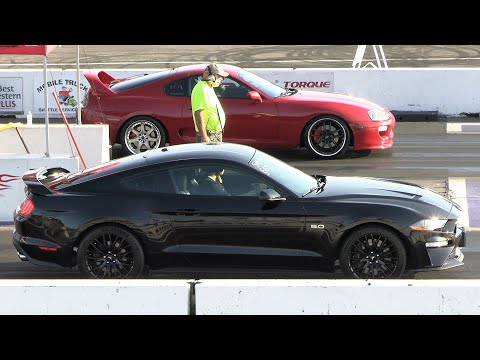