5 Motorcycle Melts Down the Track Under Its Wheels As It Drags On 150°F Ground Temperature
Car video reviews:
Coverstory

Home > News > Auto Motorsport
Razvan Calin
A Chevy dragster so fast it gives the driver tunnel vision. No wonder, with its 598 ci (9.8-liter) Armageddon-raiser of a big block under the cowl-induction hood. As if Chevrolet’s power plant (Hurricane Racing Engines modded) wasn’t tormenting enough, it has a pair of 94 turbos strapped to it that could make Hellboy look like a kindergartener.
13 photos

The ferocious drag racer sends 2,800 horsepower to the beefed-up rear tires. The end result is – tunnel vision. The car can accelerate so quickly that the original owner was losing it. He stopped punching the quarter mile because the vehicle was so enormously fast off the line that the driver was on the brink of losing consciousness.

This is when a friend’s help is much appreciated. If the original owner can’t race the car, letting rust away in all that might be downright profanity. So that’s exactly what happened to this 1966 Chevy II Larry Larson-built dragster. With a driver swap, the car keeps running. And run it can indeed! Just look at the video and see how it darts off the line at a pace that would make the Flash jealous. Even if it hazes the tires with too much power at once, the car can still pull away like a missile.

The Rossler 400 transmission is the perfect match for the Bib Bubba M&T fat tires, which take a lot of punishment and come back with a blitzkrieg of a quarter-mile run. Fast and furious, watch and learn. The car is showcased on the builder’s website. It has been modified since it was posted there.

Look at the video and be amazed at how indecently fast this car is. Not only does it win, but it also does so by a canyon of a gap. However, there is a downside to monstrously fast runs – breakdowns. After thrashing the El Camino in the third round, the Larson Chevy pays a heavy price and falls short of putting up a fight against the following round’s opponent. Click Play to see what went wrong. 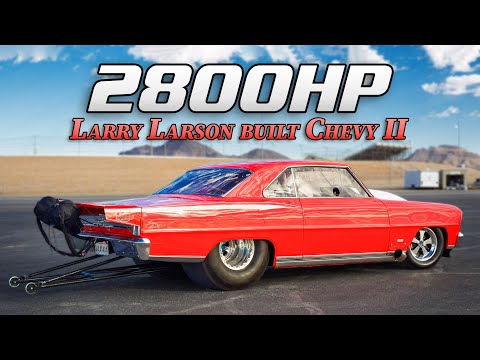