5 Matchbox France Series Mix 2 Is Coming to a Shop Near You, Has Six Cars Inside
Editorial

Dragos Chitulescu
Have you ever wondered what goes on inside your brain when you're watching a commercial? Consider how that short video influences your thoughts, decision-making process, and goals. We are being bombarded with ads for various products and services, and we might not always realize how profound an effect they have on us. I'd recommend you watch South Park's "Sponsored Content" and "Truth and Advertising" episodes, for research purposes of course.
20 photos

A few days ago, a Hot Wheels enthusiast that lives in Asia managed to get his hands on the new 2023 Case C. And you might remember us mentioning a certain mash-up of Hot Wheels commercials that was 26 minutes long. Well, we thought we'd delve deeper into that subject, to see just how the brand has evolved since its 1968 debut.

This video can also provide insights for new collectors and younger people in general. And it might trigger some flashbacks for those of you that have seen them before on Cartoon Network or other channels.

The first commercial features the famous Sweet Sixteen collection, while also promoting the track accessories. It's amazing to think you could have picked these up for next to nothing back in the day, while a full set will cost you thousands and thousands of dollars at present time.

One thing you'll notice is that kids are always shown playing with these items. This way those watching at home would get hooked on the idea of doing the same. And most of the time parents will go the extra mile to keep their children happy, even if buying scale-model cars doesn't make sense in the adult world.

The 1970 video addressed a problem that was starting to become quite common with more and more collectibles on the market. If you're going to buy Hot Wheels items, you'll probably want to show them to your friends.

With no Social Media or the Internet for that matter, the only way you could do that was to walk over to your friend's house and do so. When you get to a point where you don't want to damage your prized possessions, you need a smart way to carry them around. And the Hot Wheels Rally Case did just that.

Jonny Smith showed up at the Hot Wheels Legends Tour event in the UK with one of those. It's shaped like a tire, and if you can settle for 12 slots you'll have to pay about $60 for one that's in relatively good shape.

But if you don't mind increasing that budget to $500, you can buy a case with 25 Redline cars inside to kickstart your vintage collection. The 1971 ad took things a little further, in an attempt to connect with its target audience. "What's your favorite Hot Wheels?" triggered several answers including Red Baron, Beach Bomb, Power Pad, and Evil Weevil.

As one child answers "The Frog", it is clear to everyone that he isn't in on the whole HW phenomenon yet. And you wouldn't want to be an outcast in school now, would you? If everyone's following a new trend, swimming against the current might not be the best idea. "All cars sold separately" is also an important disclaimer that you'll notice across most if not all of Mattel's commercials.

In 1972, the company introduced the Side Kick. This new concept had a slide-out driver's seat, attempting to make it even more desirable to the general audience. There were eight different colors for it that year, and a used one will set you back as much as $275!

In 1981, Hot Wheels focused on further pushing the P911 Turbo, which proved to be successful in 1980. During the commercial, one of the actors also notes one of the key aspects of Hot Wheels cars: "They're fast because inside they've got a racing axle, for speed."

This set Hot Wheels apart from its competitors back in the day, and kids simply loved it. Who doesn't remember racing these cars on concrete or the bedroom floor? In 1982, Mattel went further and appealed to parents with an emotional call to action.

"When your son is away from home, send him something special: a Hot Wheels car!" This campaign coincided with the launch of the new Real Riders series. We are talking about vehicles with real rubber tires and realistic thread.

More than 20 cars received the rubber treatment which would mark the beginning of a new era for the toy manufacturer. Even to this day, Real Riders Hot Wheels are the most appealing models to the adult audience, and they also provide a bigger margin for Mattel.

By the time you reach the 2017 commercial, you'll realize how things have changed for Hot Wheels over the years. The best way to make money is to spend money, and Mattel has constantly increased its marketing budget. The 2017 video brings an added element of realism to the table, with a child's mother driving an actual muscle car throughout the whole thing.

But once the going gets tough, you realize that this is just a fantasy world and that the bridge is a representation of the Hot Wheels tracks. You aren't going to find these in every HW collector's home, but they're starting to look like a pretty neat idea to have fun with your scale model cars. We hope this video hasn't kickstarted a diecast addiction for you if you didn't already suffer from one. 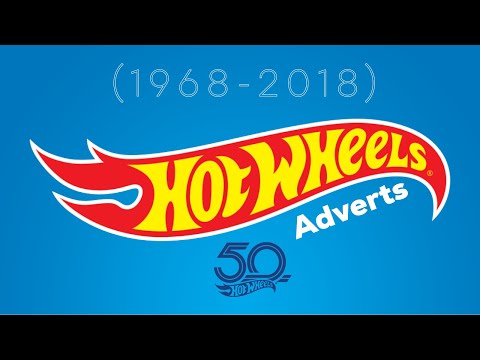