2 Bentley Says Goodbye to the 650-Horsepower W12 With a $1.5 Million Dollar Coupe

A one-of-fourteen bespoke, zero-number prototype, one-off $2.23 million roadster with no roof, no reverse camera, and no practical trunk hits the streets In the UK. The perfect opportunity for a different type of car review for one charismatic YouTuber.

Right. All of the above makes little or no sense at first glance. Bear with me – Mat Watson from carwow (famous for wacky drag races) got his hands on a very elusive, exquisite, expensive, and extravagant Bentley. The Bacalar is a very select Bentley Continental GT-based, topless luxury car.

Topless, as in there is no roof for the open-top roadster that pulls its roots from the Bentley Continental GT convertible. The interior – bespoke from top to bottom – is rain-proof. Then again, with two million pounds sterling (2.233 million US dollars at the time this story was written) at hand, the owner of one of the twelve Bacalar cars ever made can fly the car to where there’s sunny.

Well, the hugely popular YouTuber got the chance to drive the 13th of the dozen. Confusing, I know: the Bacalar is a twelve-unit production run, but the car Mat has been granted driving rights is the prototype, and it is car No 0. Zero, and if you add 12 more to it, you end up with thirteen. (there, Bentley has reinvented math with this car).

Apart from its shardy-humpy-fluid looks, oversized front vents, and other-worldly headlamps, it is no different from the more conservative-looking Continental GT. Under the hood, the same six-liter W12 engine still puts out 650 bhp (659 PS) and 667 lb-ft (904 Nm). But, with more carbon fiber on the body, the Bacalar is lighter, therefore, faster than its regular-production cousin. It still shares the AWD eight-speed automatic drivetrain, and in the one take zero-to-sixty mph launch that Mat did, it pulled 3.73 seconds.

No top speed, though, as the YouTuber drove the prototype on public roads (and it didn’t quite strike pedestrians as a luxurious car, as you can see in the video when Mat asks them to guess the price). The interior is weather-proofed, as I mentioned before, and it has 148,199 stitches and ancient wood panels. By antique wood, I mean older-than-the-pyramids-of-Egypt old.

“Reclaimed wood from trees that fell 5,000 years ago, only to be preserved in riverbed silt. It is slowly air-dried in a controlled environment to prevent damage while conserving its natural straight grain.” (Bentley’s own Mulliner division description of the ultra-rare choice of trimming material.)

The car has just two seats and a very narrow trunk access opening (if this should be a concern for a 2,23-million-dollar vehicle), and, just like any extravagant show-off on wheels, it has some hidden flaws too. The leather-strap door opening system wears off relatively quickly (check the gallery for photographic proof of that mishap), and the door sills are painfully wide (as Mat quickly demonstrates in the video).

Also available in video mode is the relatively unsophisticated sound of squeaking at low speeds on uneven road surfaces (hear it at the 4:10 mark). A fault occurs in heavily-driven prototypes, such as this example (the odo reads 8,591 miles – 13,825 km). Again citing Bentley, “To test its capabilities, two prototypes were created and put through their paces over a period of 20 weeks, during which they underwent 45 individual validation programs.”

The drive-test of the multi-million-dollar vehicle has some practical value in the form of a rather unpleasant find. The “buffeting” downside effect of the roofless design is not something to look forward to, mainly since Mat stayed under the 60-mph limit (96 kph).

The Bacalar is sportier than the mainstream Continental GT, with a more rigid body and power sent to the rear axle. However, as the reviewer comments, these cars might not necessarily enjoy much road life but rather a value-appreciating status of (super-luxury) garage queen. 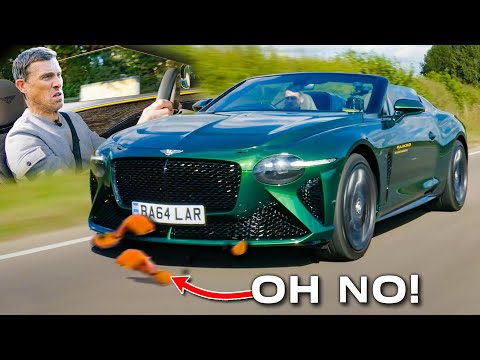