1 Shelby GT500 Races the TFL Ram TRX, Result Is Not What You Would Expect

Someone Wants to Bring Back a Piece of Venus’ Atmosphere, And Some Cloud

The world of restomods is starting to feel similar to the world of professional drifting in a way. If you ever find yourself at a drift event, you might be surprised to see that a BMW won't necessarily have a BMW engine in it. And a Nissan might not have a Nissan engine inside. Not that there's anything wrong with that, but some Ford purists might be outraged to see what kind of an engine this old F-1 is hiding.
61 photos

We've seen enough restomods so far to know that a modern, capable engine is required to complete the build. And we know that there are plenty Ford developed options out there that could fit the application. But whoever built this special F-1 envisioned things differently, and we don't really mind that he did. This is a very clean build, proof that once again, keeping things simple is the right way to go.

The engine swap occurred about 2,000 miles (5,150 km) ago, and a Chevrolet 5.3-liter crate motor was brought into play. Just throwing in a stock engine wasn't an option, and there are a series of upgrades that really bring out the potential in this LC9 unit. A dual plenum air intake was added, alongside a set of Sanderson polished headers, while the soundtrack is provided by a Calico coated 2.5-inch (6.35 cm) X-pipe dual exhaust.

Modern problems require modern solutions, so this engine features an Edelbrock Pro Flo fuel injection system, Edelbrock polished valve covers, and an aluminum radiator to cool things down after a wide-open throttle run. Official performance figures haven't been disclosed, but we wouldn't be surprised to see around 500 horsepower on the dyno chart of this thing. Stopping power was not neglected either, as Wilwood provided the brakes.

With a Chevrolet engine in it, it only made sense to have a Chevrolet gearbox handling the power delivery. The 4L65E gearbox on this F-1 can also be found on GM trucks like the Cadillac Escalade or the Hummer H2. The truck is currently located in Charlotte, North Carolina, and its asking price is enough to have you wondering if you'd be better off in a Shelby GT350 instead, as it stands at $65,995. 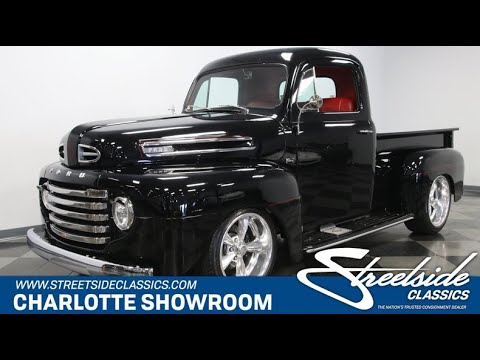