1 Cadillac GT8 Is a Buick GL8 Century MPV in Disguise, Looks Dope but It's Pointless

2024 VW Golf 8 Informally Presents the Colorfully Refreshed Goodies, Inside and Out

Aurel Niculescu
Volkswagen Golf, the small family car that kickstarted the compact revolution back in 1974, is the epitome of its segment for many automotive fans. And it will continue to be, thanks to the updated recipe of success.
29 photos

Eight generations have passed since its introduction and – although technologically advanced – the Golf’s unmistakable styling DNA is still there. Over the decades Volkswagen has perfected the subtle upgrade recipe and today everyone is used to it, both in the real world and across the virtual realm.

A good case in point about the latter reality could be made here courtesy of the good folks over at the AutoYa info channel on YouTube, who have decided to CGI-imagine the complete looks of the yet unreleased (or even rumored/spied, for that matter) VW Golf 8 refresh. Both inside and out, as well as with a complete (unofficial) color palette, as per tradition.

The “first look at the Mk8 mode restyle” kicks off with an ensemble shot of the proud generations, along with a little bit of background about the current iteration. The eighth generation was revealed in late 2019, first deliveries kicked off in 2020, and even more than two years since that moment Volkswagen is still adding new versions to the roster. Such as the Golf R Anniversary Edition, which can be had in the United States for around $45k.

Alas, the channel’s pixel master and host believe that Volkswagen will follow the trend of shorter product lifecycles, so presumably, a facelift could arrive as soon as the model year 2024 (2023 for Europe). Well, it already did, at least virtually, with the latest rendering premiere focusing on all aspects of the VW Golf 8 – first the subtle interior changes, then the subliminal rear restyle, and last – but not least – the front three-quarters POV.

All chapters are noted with the proper timestamps in the description, as always, and be sure to also check out the colors reel to select your favorite hue plus the comparison to see exactly what was modified. 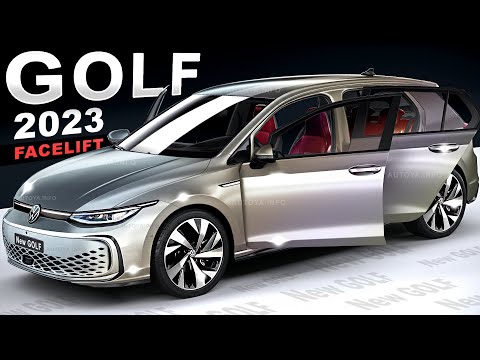