2 Electric Volvo MPV Is a Forbidden Fruit in the U.S. And Not Just Because It’s CGI

2024 Porsche Taycan Allegedly Has 1,000 Horsepower, Gets Spied During Winter Testing

Home > News > Renderings
Aurel Niculescu
Toyota is doing great in North America as far as enticing consumer perspectives are concerned. And it needs to do even better, otherwise, rivals will steal its crown.
9 photos

We could easily say that Honda took last year’s laurels in terms of new market introductions with the all-new HR-V which is now larger and sold as ZR-V internationally, the next-gen of best-selling CR-V, a three-row family and adventure-oriented Pilot TrailSport, or the feisty Civic Type R, and the eleventh Accord! So, Toyota needs to recoup the lost brand image effect, and fast.

They started on the right path with the arrival of the 2023 Toyota Crown crossover sedan or the introduction of the 2023 Prius ‘Hybrid Reborn,’ among others (such as the bonkers GR Corolla). And, officially, there are even more goodies to expect – including the 2023 Corolla Cross Hybrid, the Trailhunter series, or the 2023 Prius Prime plug-in hybrid.

But unofficially, this is just the tip of the iceberg. Especially if we are to believe in the dreamy realm of virtual automotive artists. Among them, we could easily include Dimas Ramadhan, the pixel master behind the Digimods DESIGN channel on YouTube, who has a major crush on CGI Toyotas and now has taken up the task of revealing an all-new, virtual RAV4 compact crossover SUV. That’s a tall order, considering the model’s best-seller status in North America.

Alas, this CGI expert has a lot of digital practice with (quirky) virtual Toyotas. As such, we have recently seen the likes of the 2024 Toyota 4Runner TRD Pro getting streamlined yet still rugged or the Hilux TRD Pro mid-size pickup truck digitally making Tacoma fans proud of it, just to speak of trucks and SUVs. Now it is also time to turn a new CGI chapter regarding crossovers, and the iconic RAV4 certainly fits the bill like a charm.

Introduced back in Japan and Europe in 1994 and in North America a year later, Toyota’s RAV4 is credited with inventing the compact crossover SUV segment, and its legend never stopped growing ever since. Today, it has already reached the fifth iteration back in 2018 (XA50), so many would logically consider that 2024 or 2025 would be a natural timeframe for the sixth generation’s introduction. Alas, do take all this with a healthy dose of salt – at least until we get official word from Toyota itself.

Until then, this is merely wishful thinking, especially since the CGI expert deploys a rather different front-end styling from the current Toyota design, the side profile mixes the RAV4 allure with something that resembles a Mazda CUV, and the rear goes out on a limb to make it a sporty CUV. Still, we are pretty sure that Toyota won’t do any CGI theft and treat its fresh iteration to a set of Lamborghini Urus taillights, some blood-red Italian body panels, and a carbon fiber-infused diffusor complete with quad exhaust pipes! 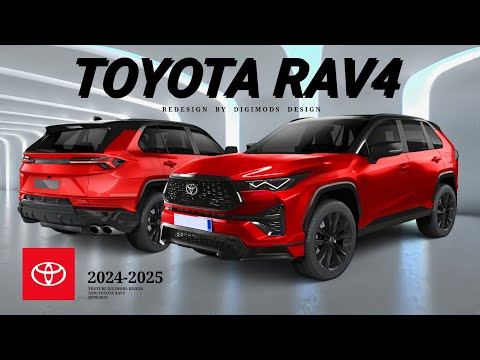