3 Porsche 911 Facelift Spied During Testing in Winter Wonderland, Has a Digital Dash

Home > News > Spyshots
Sebastian Toma
Porsche's preparation of the 718 Boxster Spyder RS continues, and we have a new set of spy shots of its prototype. This time, the German marque took the prototype to the Nürburgring Nordschleife, and it was tested as you would expect. The performance-oriented roadster was driven with its top down, which meant we got to see more of its interior.
36 photos

You do not have to be an expert to spot that there is something different about the seats of this prototype. Good eyes, by the way. These are the "Weissach RS" seats that come with this special edition of the 718 Boxster. It is unclear at this point if these will be standard or offered as an optional extra.

As we previously reported on the topic, the 718 Boxster Spyder RS will get the same engine as its 718 Cayman GT4 RS cousin, which is "borrowed" from the 911 GT3. The flat-six in question should pump out about 500 horsepower, and the two vents that sit behind the driver and passenger's ears, as they are near the doors, will help the engine breathe better while also making cool induction noises.

Just like previous prototypes, this one comes with center-lock wheels, which are believed to be standard for this model. Since this model has already reached the phase of Nürburgring testing, you should expect the finished product to be revealed by 2023, if not sooner.

The German sports car is expected to only be offered with a seven-speed PDK transmission, as is the case with the Cayman GT4 RS. The latter is capable of sprinting from 0 to 100 kph (62 mph) in just 3.4 seconds, while the top speed is 314 kph (195 mph).

The 718 Boxster Spyder RS is not meant just for straight-line speed, but it will also be capable of setting hot laps on the track without breaking a sweat, since this is a Porsche we are writing about. If you take a closer look at the photo gallery, you can see that the test driver is driving the 718 Boxster Spyder as hard as possible for a prototype in this stage of development. 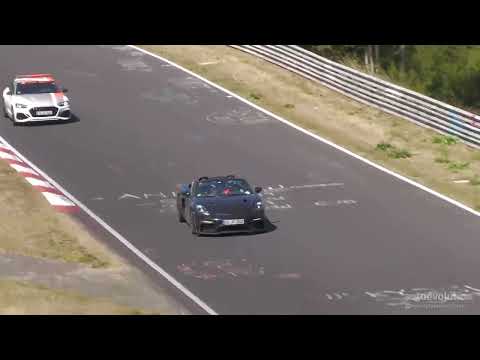