A prototype of the next Maserati GranTurismo has been spied arriving at the Nurburgring for a few fast laps and then taking on the famous German racetrack, only instead of featuring an all-quiet powertrain, it packed an internal combustion unit.
7 photos

Sounding like a future dream car, this tester also has quad exhaust pipes, yet other than that, it looks the same as the battery-electric versions that we have seen in the open these past few months. Nonetheless, once it premieres, we expect it to have slightly different bumpers at least, and maybe new wheels too, and new interior upholstery and trim.

Power is expected to be supplied by the Maserati Nettuno, a 3.0-liter V6 engine with twin-turbocharging and undisclosed output and torque. We may not know the juicy details for now, but one thing is certain, and that is the fact that the all-new Maserati GranTurismo, as well as the GranCabrio, do sound very good with this mill breathing air from behind the wide grille decorated by the Trident logo in the middle.

As for the battery-electric models, these will add the Folgore suffix. They are understood to pack no less than three electric motors, with a combined output rated at around 1,200 ps (1,183 hp / 883 kW). This will make the GranTurismo and GranCabrio Folgore versions Maserati’s most powerful street-legal cars ever. The 0 to 100 kph (0-62 mph) sprint should take less than 3 seconds, and top speed might stand at over 300 kph (186 mph).

Previous reports have spoken about a possible unveiling of the ICE-powered versions before the end of 2022. The zero-emission Folgore might follow them around half a year later, but keep in mind that neither information has been confirmed by Maserati yet, so we’d take everything with the proverbial pinch of salt if we were you. 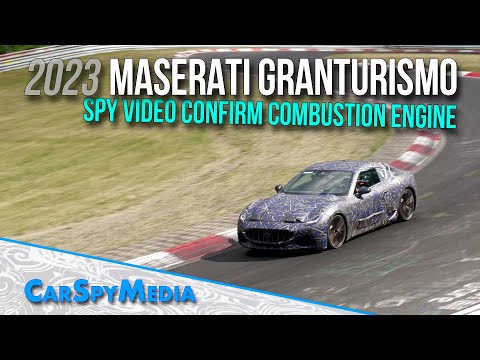