How the Chevrolet Cameo Carrier Changed the World

According to the rumor mill, Hyundai is currently thinking about expanding its EV production operations to the United States, with Georgia a likely location candidate. But before we start thinking about a U.S.-made Kona N with zero emissions, let us get the ICE stuff out of the way.
17 photos

For example, the virtual artist better known as SRK Designs on social media has recently decided to abandon the passion for future EVs like the 2024 Ram 1500 Electric pickup truck, among many others. Instead, the past couple of digital projects have been focused on regular ICE stuff like the next BMW 5 Series or the future Audi A4 generation.

Now, the pixel master continues with the internal combustion engine trend and does not even care that South Korea’s Hyundai is not a premium brand like Bavaria’s BMW. Well, the latter has “copied” the former’s split-headlight design first, so who cares about proper characterization anymore? As such, we would be better off heading into the sunset with a little crossover SUV that is all about “sensuous sportiness,” according to the CGI expert.

Naturally, the digital 2024 Hyundai Kona is not official since the automaker has only started the upgrade process less than a couple of years ago. But one cannot ever be too careful, which is probably why the author has digitally cooked up the proposed vision of a second-generation Kona subcompact crossover SUV.

And it does not look half bad when it goes for a sensuous or sporty allure. Alas, the virtual content creator has only exposed the unofficial 2024 Kona SUV from its profile, leaving much of the front and rear to our imagination. That is something rather uncool, as we wanted to see if BMW is going to draw inspiration from there yet again… Hopefully, we are just ironical, and we are not nailing a real-world premonition! 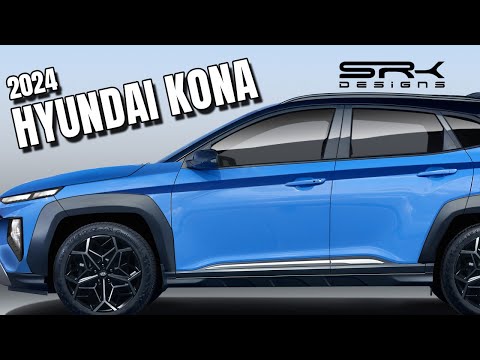