2024 Chevy Silverado EV Has Ultium Greatness, Will It Be Enough Against Rivals?

After CES 2022, General Motors wants to be known as an automaker that’s ready to transition from car company to “platform innovator.” And it is putting its Hummer and Silverado EV eggs in the same Ultium basket.

Frankly, while some were quick to herald the new reveal as the beginning of the end for GM’s internal combustion-powered trucks, the truth is a bit more nuanced than this. Sure, GMC is poised to follow in the footsteps of Chevy’s 2024 Silverado EV with its own Sierra Denali electric pickup truck. Yes, GMC also has the Hummer EV on offer. But that one is much tougher, much more lifestyle, bulkier, and more expensive.

Though, not by much, if we only compare the $105k Silverado EV First Edition and the GMC Hummer EV Edition 1, which had an MSRP of $110,295 before the reservations were full. Naturally, that hasn’t stopped folks from eagerly snapping their bank accounts once the order books were open for the former as well. And it allegedly took just 12 minutes to fill the roster in its entirety.

Arguably, that’s a great perspective for when Chevrolet will start the first deliveries. That would be around spring next year for the WT (Work Truck) version, while the RST is allegedly coming next fall. On the other hand, Rivian’s R1T is already hitting the market, while Ford’s F-150 Lightning (barring any Bronco-like hindrances) is also gearing up to fulfill the EV truck dreams of its Blue Oval aficionados.

Each one comes with strengths and weaknesses. For example, and we need to also include Tesla’s delayed Cybertruck into the fold, there’s a big argument in terms of pricing. Before the California-based, sorry Austin, Texas-based automaker pulled its Cybertruck off the online portal, pricing was entirely comparable with the 2024 Silverado EV WT. They were both a smidge below the $40k mark, just like Ford’s 2022 F-150 Lightning Pro. With a slight advantage for the 39,900 MSRP envisioned by GM.

Meanwhile, Rivian’s R1T is creeping way closer to GMC’s Hummer EV. The Explore Package kicks off at $65,700, while the most affordable electric truck from GMC will be the $79,995 Hummer EV2 from spring 2024. Then, we need to take into account payload and towing capabilities if we are to be thorough. Interestingly, those will be heavily influenced by a simple calculus. Do owners want the hauling goodness or the expected range?

Unfortunately, these three values will be heavily influenced by each other (and then some more factors). So, it really does not matter if Chevrolet has a 200-kWh battery pack as per rumors. Against a smaller capacity from F-150 Lightning and R1T and higher option from Tesla’s Cybertruck. It all boils down to how fast the battery pack can be replenished (350 kW) and how a range of factors, including weather (for example), will influence the touted up to 400 miles (644 km) of range on a single charge.

That key combined aspect will only become apparent once every player is out into the world. So, we are in for a long haul before we can say if the Ultium-equipped Silverado EV (and Sierra EV, and Hummer EV) is better or worse than any of its direct or indirect competitors. Subjectively, it’s anyone’s choice. Some will love the fashionable Hummer EV. Others will go for the new kid on the block.

Which, for once, is not Tesla’s Cybertruck. But Rivian’s R1T model. And logic tells us that when it comes to regular, pickup truck-loving folk, both Ford and Chevy have an advantage over Tesla. That would be the eagerness to remain true to their core design strengths.

So, I reckon that affordable EV truck sales will see Ford and Chevy/GMC duke it out for eternal glory. Logic also dictates that we keep an eye out for Stellantis’ EV moves. Then it’s a fight for standing out in various fashionista crowds between Cybertruck, Hummer EV, and the new outsider called R1T. 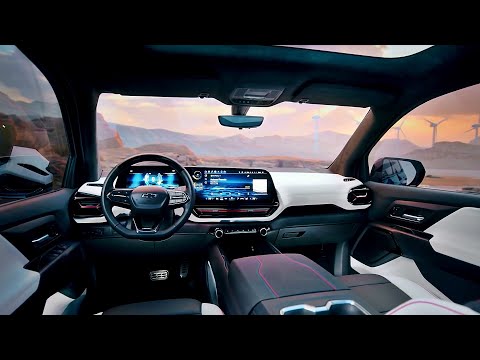