3 2023 Audi A4 Avant Spied for the First Time, Looks Sportier Than Ever

2024 Audi A4 Avant Looks Like an All-Weather Warrior, Too Bad They Won't Sell It Stateside

Like minivans and sedans, estates have also lost significant ground to crossovers and SUVs. However, Audi is among the companies that won’t drop its A4 Avant (and bigger A6 Avant), for now at least, so they have started working on the new generation.
11 photos

The premium compact wagon, which will continue to rival the likes of the BMW 3 Series Touring and Mercedes-Benz C-Class Estate, made its spy photo debut last year. Roughly a month ago, our spies snapped another tester in the open, near the Arctic Circle, and now a new prototype has been spotted in the same cold environment, this time on video.

Looking pretty much like an all-weather machine, thanks to its optional quattro all-wheel drive system, the 2024 A4 Avant will still be instantly recognizable as an Audi. Think of it as an evolution of the current one that has been around since 2015, with new everything, from the design inside and out, to most (if not all) engines, technology gear, and safety systems.

It will feature slimmer taillights on each side of the smaller grille, shrunken side air intakes in the front bumper (or so it appears), cleaner profile, and new lighting units at the back that have yet to show their pattern, as the ones equipping the prototypes so far have been provisional.

Power-wise, we might be looking at the normal 2.0-liter gasoline four-bangers, as well as at least one diesel for the European market. Reports speak of mild-hybrids and plug-in hybrids, and if they are correct, then the RS 4 should feature electrification too. Since the new A4 will be sold after 2030 too, albeit in the facelifted iteration anyway, a battery-electric model is expected as well.

It is very likely that Audi will not sell the new-gen A4 Avant in the United States. However, the normal sedan will make its way to the New World, probably for the 2024 MY, and so will the jacked-up Allroad in all likelihood. 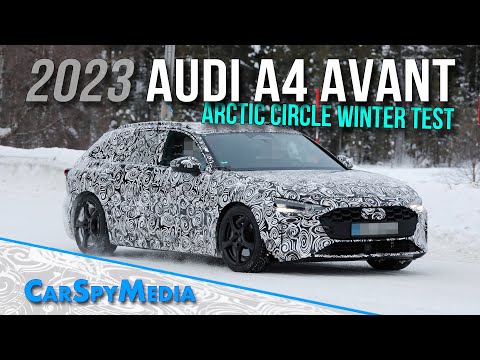