1 2023 Yamaha Niken GT Has a Different Engine, Modern Tech, and Is Available in Black

Mircea Panait
Manufactured since 2006, the XMAX has entered the 2023 model year with a few notable changes. Over in the United States, the scooter has been updated with a few design improvements, a full-color TFT display, and Y-Connect phone connectivity features that includes Garmin sat nav.
12 photos

Y-Connect allows the rider to connect his or her smartphone directly to the 4.2-inch display of the infotainment system, which is joined by a 3.2-inch display for the speedometer just above it. Handlebar-mounted switchgear also needs to be mentioned, along with the Y-Connect smartphone app which, will be launched today, November 8th, at 10:00 PM Eastern Time.

Regarding satellite navigation, the user is required to install the Garmin StreetCross app on his or her smartphone. As expected, the 4.2-inch display can be used for turn-by-turn navigation. Also free of charge, this app is compatible with both Google Android and Apple iOS devices.

Y-Connect can be paired with a Bluetooth headset for music and volume control, as well as the ability to receive calls. Y-Connect further sweetens the deal by displaying text and email notifications, weather forecasts, the phone battery level, connection status, and time on the scooter’s display.

Offered exclusively in Granite Gray, the U.S. version of the Yamaha XMAX for the 2023 model year will be available from dealers beginning January 2023 for $6,099, excluding taxes. Your only engine choice is a single-cylinder Blue Core that flaunts nearly 300 cubic centimeters, a liquid-cooled powerplant crafted from DiASil aluminum for the sake of heat dissipation.

The only piston featured is forged, as is the crankshaft. Equipped with a semi-dry-sump lubrication system and a counterbalancer for minimal vibrations, this motor is connected as standard to a continuously variable transmission. Traction control, 15- and 14-inch wheels, disc brakes, a 3.4-gallon (make that 12.87 liters) fuel tank, and up to 75 miles per gallon (3.13 liters per 100 kilometers) pretty much round off the list of goodies. 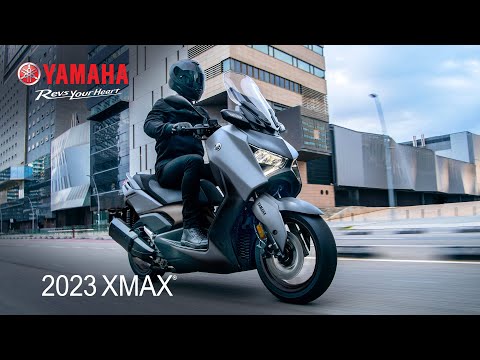