Long-awaited, the 2023 Toyota GR Corolla five-door hot hatchback has been unveiled to make North American GR Yaris enthusiasts proud of their next JDM ride. However, the release was mere hours away from a rather ironic annual custom.
16 photos

Showing off that it understood very well the granny-like brand image issues from a while back, Toyota has made strides in stirring up deep feelings in the enthusiasts’ souls, especially with help from its Gazoo Racing division. The fourth bespoke act – after the GR Supra, GR Yaris, and GR86 – is equally consistent. And it will turn into a purist delight a bit later this year when the Core version’s first sales will begin.

The 2023 GR Corolla looks wide like a proper Hot Hatch, sports the same 1.6-liter three-cylinder turbo engine as GR Yaris only enhanced to 300 horsepower, and mates the GR-Four all-wheel-drive system with a six-speed row-your-own-gears manual transmission. And, naturally, it will soon turn into a virtual automotive artists’ delight. But before that happens, there is a little bit of CGI shaming going on.

One of the quickest – if not the first – pixel masters to dabble with the 2023 GR Corolla is the virtual artist better known as Theottle on social media, who seems to have taken a bit of April Fools' notice of the recently unveiled rally-inspired compact five-door hatchback. As such, he confessed that he absolutely had to transform it into something else: a third-generation “Perodua GR Myvi.” Confused?

Well, Perodua is Malaysia’s largest car manufacturer and its Myvi (aka Malaysian Vision) is also internationally known as the Daihatsu Sirion, Toyota Passo, and Subaru Justy. That will not make any GR Corolla aficionado feel any better but at least provides some context as to why an unsuspecting Toyota morphed into a little-known Malaise car. Now, give us your honest opinion, does it look feisty, or did we just get digitally pranked? 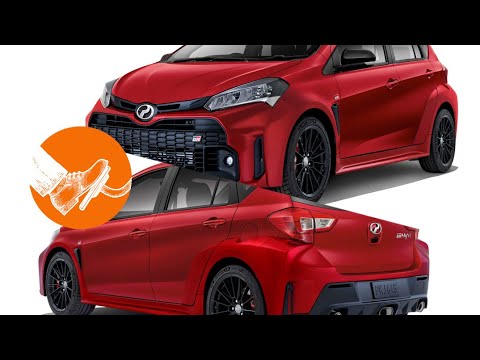